She Might Be the Dumbest Representative in all 57 States

For the sheer joy of it: Congressional bonehead, Shirley Jackson Lee, strikes again. Twice. On the same day.

First she shares with us her unique knowledge of history and world geography, pointing out that today the Vietnams – both North AND South – are living in peace. No thanks to us. 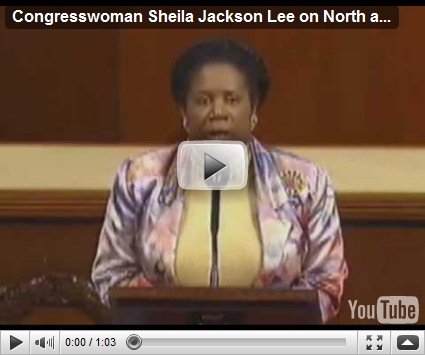 Frighteningly, this Representative from Texas may not be the dumbest member of Congress. That honor might belong to someone representing one of the other 57 states.

On the other hand, she’s definitely in the lead. Also from Wednesday…

And I thank you professor very much. I’m going to be engaging you with those very powerful numbers that you have offered on what the tea party recognizes, uh, or is recognized as. Might I add my own P.S.? All those who wore sheets a long time ago have now lifted them off and started wearing [applause], uh, clothing, uh, with a name, say, I am part of the tea party. Don’t you be fooled. [voices: "That's right.", applause] Those who used to wear sheets are now being able to walk down the aisle and speak as a patriot because you will not speak loudly about the lack of integrity of this movement. Don’t let anybody tell you that those who spit on us as we were walking to vote on a health care bill for all of America or those who said Congresswoman Jackson-Lee’s braids were too tight in her hair had anything to do with justice and equality and empowerment of the American people. Don’t let them fool you on that [applause]….

Let the record reflect that despite Andrew Breitbart’s offer of a $100k award for anyone who can provide evidence of alleged racial slurs hurled at Congressional representatives on the day in question, none have come forth.

So much for our first post-racial presidency.

Posted by DEWEY FROM DETROIT at 9:14 AM