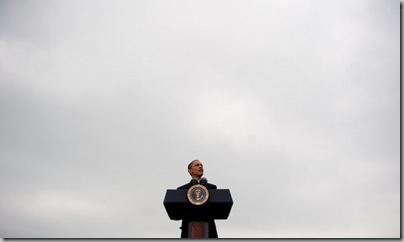 We’re in Western Michigan for our niece’s wedding this weekend. I can tell you from the local news that the “folks” here haven’t taken kindly to President Obama’s cheap shot at local Representative Peter Hoekstra at Thursday’s ground breaking ceremony for a car battery plant.

With Republican U.S. Rep. Pete Hoekstra in the audience, Obama took a swipe at Republicans in Congress who opposed his economic stimulus plans, but, he said, show up at ribbon cuttings such as the one in Holland to celebrate projects that benefit from federal aid.

Hoekstra, who represents a very conservative district, tried to be circumspect:

“I'm here because I respect the office of the presidency, and I respect the company that's making the investment here," said Hoekstra, who lives in Holland.

Normally, the president’s office ensures that local politicians – of both parties – are invited  to these photo ops. Can anyone envision either of the Bushes, or Clinton, of being so peevish and ungracious? Is there nothing this thin-skinned president doesn’t react to personally? Generally by the time one reaches the office of the presidency, one has had experience dealing with adversaries in a way that doesn’t make you appear to be a narcissistic twit. Unfortunately, community organizing doesn’t offer many of those opportunities for personal growth.

But back to the battery plant. It is a wholly owned subsidiary of Korean conglomerate LG. The federal government gave them a $151 million grant to build this green plant which is expected to employ 3-400 employees. Here in conservative western Michigan, where they still teach math, most of the frugal “folks” of Dutch heritage don’t consider that good value. 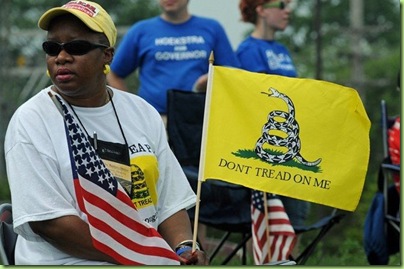 There were both Obama supporters and Tea Party supporters along the presidential route to the LG Chem plant ground breaking. Wouldn’t you know that the only non-white Tea Party member in the entire country would live in Holland? What are the odds? 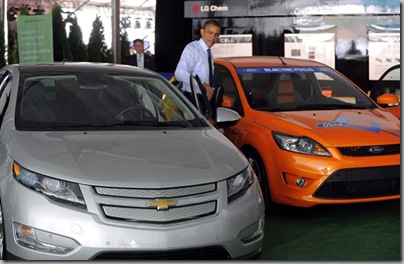 Obama tries out a Chevy Volt at the LG Chem plant 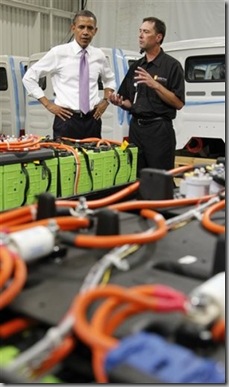 Posted by DEWEY FROM DETROIT at 8:32 AM