Of Mice and Men – Your Choice

President Obama cockily told us on the night he accepted his party’s nomination that people will look back and say “this was the moment when the rise of the oceans began to slow and our planet began to heal.”

As Charles Krauthammer suggested, he’s going to try his hand at channeling King Canute  today when he shows up in Louisiana.

Yesterday the President finally, after nearly a year, held what is still nostalgically referred to as a “press conference” to explain that he’s in total charge of the oil spill in the Gulf, and takes full responsibility. Except that he also took the opportunity to blame Bush (twice) and BP (naturally) and claim that he didn’t know if the Director of the Mine Management Service was fired or resigned because he was “busy with a lot of other stuff” when she might have submitted her letter of resignation – if she hadn’t been fired. This is a leader who not only doesn’t know how to lead, he doesn’t even know how to pretend to take responsibility like a leader.

And seriously, who brings teleprompters to a presser? For what? To keep track of the key talking points for response to the pre-approved and/or anticipated questions? 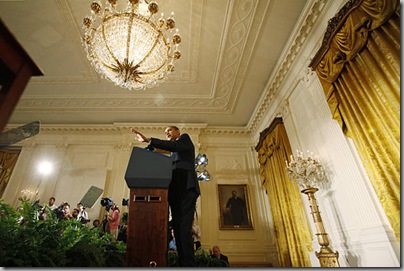 I’m not sure it worked. When not fully scripted, this man has a brain stutter – like a 6 second buffer between his brain and his mouth that usually ruins whatever thought was there to begin with. Maybe that’s why he can’t answer the simplest of questions in anything under 5 minutes.

And note how, when he unwillingly wades into uncomfortable waters, his non-fluencies begin to exceed his actual words: uh, uh, uhs, um, ums, and er, er, ers. Had GWB handled questions at a presser like this, the press corp(se) would still be snickering about it on the 4th of July weekend. And yet, since he can smoothly read a prepared script, he enjoys the reputation of being not only a great orator but a deep thinker. Our standards are set on such a superficial level by MSM that they could probably get anyone elected. (Oh wait - they already did.)

In addition to stopping the tides, Obama also announced he’s put a hold on all future drilling in the Gulf – explaining that it’s just too darn dangerous to have to go down so deep to drill for oil. Of course he can only stop the drilling of American companies there, who are already prohibited from drilling shallow water wells. So the only people who will be drilling in the Gulf – shallow or deep – will be China, Mexico, Canada, Britain, Indonesia, Venezuela, and 4 others. He explained that it’s precisely because of this deep water danger that we never heard him saying “drill, baby, drill.” As Mark Levin asked, what is the alternative? Freeze, baby, freeze?

And not to split hairs, but how deep below the surface would we have to go to drill in ANWAR? Oh, that’s right, that’s surface drilling. But we don’t like that either.

We are told by both parties that we must wean ourselves of our dependence on foreign oil. To do that we need to allow drilling in this country. We need to build Nuclear electricity plants. But government overreaction to Three Mile Island resulted in regulation that now requires a 10-15 year lead time for any new facility. Needless to say, it’s neigh on impossible to cost-justify any investment with that kind of lead time. Now we are on course  to do the same with the oil industry. Why, with government, is the answer  either zero or a trillion?

We can continue to pretend that this country doesn’t need new traditional energy sources, that “green” alternative energy is the answer. But we do so at great peril to ourselves, because it’s simply a sham. A claim about as supportable as global warming turned out to be. But that will not stop this administration from tying our hands and leaving us crucially vulnerable to future energy shortages.

Obama was elected with money from people who are invested in and betting on carbon credits and wind turbines; so look for a push back against everything else. And there’s our future folks: wind, solar and mice on treadmills. All of which can make approximately the same proportionate contribution to America’s total energy needs. 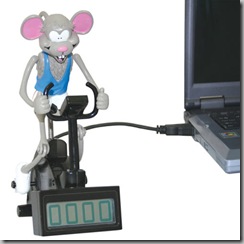 Posted by DEWEY FROM DETROIT at 1:02 PM