After more than three times the normal 72 hour  Obama administration disaster response delay, it appears the public relations arm is springing into action, and actually planning a presidential fly-over of the Gulf catastrophe.

You need to see Doug Ross’s graphic representation of Obama’s studied inattention to the Deepwater Horizon oil rig disaster, a disaster that is increasingly being referred to as “Obama’s Katrina.” 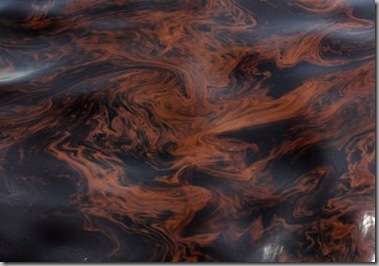 Not that he could have done anything to prevent it. But because, in the face of the catastrophic explosion followed by the environmental disaster of a magnitude not previously known, Bush’s Obama’s inclination was to take a campaign style swing through the Midwest, visit an organic farm, tour a biofuels plant, and check out a wind turbine factory. Oh, yes - and dispatch a phalanx of lawyers to “ensure environmental laws are vigorously enforced.”  No, Mr. President, bureaucrats are not going to cut it for this one. Which is why this will come to be known as Obama’s Katrina; or more appropriately, Obama’s Deepwater. It will expose his administration’s ineptitude at anything other than cramming legislation down our throats. And maybe it will make a few more people question whether such an inept regime should be given carte blanche to “transform America.”

Perhaps if the oil breached the Louisiana levees, then caught on fire, and then turned New Orleans into a Dresden-like inferno, the President would stop campaigning for a couple of days and actually pay attention to his own, personal Katrina. Even The New York Times has noticed, decrying the President's lackadaisical response. But I'm guess(ing) that somehow, someway, it's all President Bush's fault.

But before heading for the Gulf, or the correspondent's dinner, or both, Obama dropped by Ann Arbor to deliver the commencement address at the University of Michigan. 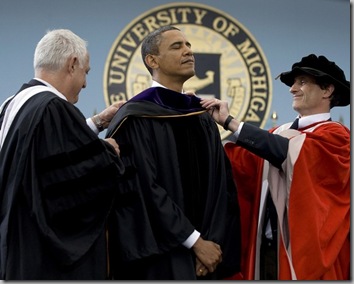 There are no words to express our despair over seeing the Prez in maize and blue, but glad to see he wears it regally.

He told the graduating class:

"Despite all its flaws, our democracy has worked better than any form of government on earth," …Obama also challenged the graduating class by asking, "How will you keep our democracy going?"

Good question Mr. President, good question.  Many of us would ask you the same thing.

He went on to whine about admonish the bitter clingers out there:

"We can't expect to solve our problems by tearing each other down," Obama said, using his speech to respond to some of his critics who depict the U.S. government as repressive. "It may grab headlines but it puts us on a level of murderous regimes."

Really?  Well, I’m just glad he said it, instead of one of the bitter clingers.

Posted by DEWEY FROM DETROIT at 4:31 PM