I can’t get my arms around this. This story is just so wrong on so many levels:

A Muslim illegal immigrant from Ann Arbor who fears deportation to Iran because he is gay, is in jail today after leading a sit-in protest Monday inside the office of Sen. John McCain  over Arizona's new immigration law. Tonight in Detroit, a vigil for him is to be held in Clark Park.

Abdollahi is an illegal immigrant who moved to the U.S. with his family when he was three. Now openly gay, he says he fears deportation back to Iran because of that country's stringent laws against homosexuality, which call for execution in some cases.

No, he didn’t forget he was illegal when he decided to join in the act of civil disobedience. He thought it would be a good way to draw attention to his plight, and the plight of millions of other foreign-born children of illegal immigrants. I guess he was right about that.

"Never in our history has it been American to deny people their civil rights," Abdollahi said in a statement. Our history, Mr. Abdollhi? Your “papers,” if you had any, would identify you as an Iranian citizen. A political regime that recognizes very few civil rights. I’d fear deportation too. Did that thought enter your brain before you decided to stage an act of civil disobedience? Did it ever dawn on you that not being a lawful citizen you might not be granted “our” civil rights?

"We have decided to peacefully resist to encourage our leaders to pass the DREAM Act and create a new standard for immigration reform based on education, hard work, equality, and fairness.”

Sorry to be so stubborn on this point, but they are our leaders Mr. Abdollhi, not yours. Although, having seen the ACORN get-out-the-vote effort last year in Ann Arbor, I’ve no doubt you might have voted for them -  possibly several times.

Of course the Michigan Messenger and Huffington Post are making Mohammad out to be a victim, as does Abdollahi himself.  In that regard he does seem to be quintessentially American, or at least a 21st century American, where we are all reduced to your group identity, and we’re all victims.

But I have some questions. His parents came here 21 years ago from Iran so his father could get a PhD from the University of Michigan. Presumably they had 2 different immigration lawyers who both botched the family’s immigration application on two different occasions resulting in them losing their legal immigration status. (What are the odds?) They decided to stay  anyway. I’m sure the opportunities were much greater here for them and their family. But isn’t it kind of irresponsible to allow your child to grow up as an illegal alien? Why wouldn’t a PhD from a prestigious school like the University of Michigan have the where-with-all to figure out how to correct this situation? Wouldn’t you turn every stone available to rectify your family’s situation? Yet there’s no evidence that the parents did anything else in 21 years to pursue legal status.  I’m just guessing they ignored it because trying to correct it would have been too hard. They might have had to leave the country for a while before re-entry, and that would have been both costly and inconvenient. Sometimes in life if you screw up, you have to pay the price. Or your kid does.

Nor is there any indication that Mohammad, who has been of legal age for 6 years and complains of limited work and education options because of his illegal status, ever pursued a path to legal citizenship. Other than hooking up with the professional grievance  group  Immigration Equality.  He’s just another victim of life’s circumstances. “Just waiting for the government to pass an amnesty, er, Comprehensive Immigration Reform bill.”

While that may be the way America operates now, that’s not how America used to operate. If our forebears had suffered from such passivity, such a lack of resolve and determination, there would be no America for Mohammad to  complain about  not recognizing his civil rights, Repressive regimes like Communist China and Iran do not recognize civil rights other than the ones they grant you.

Mohammad is probably a nice kid. His parents are probably nice people. And they probably aren’t any stupider than half the people in this country. But either we are a country of laws or we are not. And if we are not, we open the door to be ruled by tin pot dictators like the one ensconced in Iran. The rule of law protects citizens not just from each other, but from the government.

Yet Mohammad’s impassioned plea for “equity” is precisely where a culture that has rejected objectivity and reason in favor of subjectivity and  relativity takes you. Laws are interpreted not as written and intended, but on what we feel is equitable and fair today. We appoint Supreme Court justices who think empathy is a legitimate basis on which to interpret the Constitution and we have twits educated in the increasingly dysfunctional American school system, who think feelings should trump the Constitution and shape the law of the land. 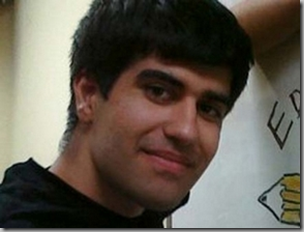 Just a young kid with a DREAM, but no papers

Well, I’ll give the kid this: at least he’s lobbying for a new law rather than just demanding citizenship. That would indicate a little better knowledge of civics than is demonstrated by Dayanna Rebolledo of Dearborn. She told the Detroit News “They want higher education because they were raised here and basically they're Americans just missing a piece of paper."

So why’s everyone so upset with Arizona for asking to see your papers? Oh yeah, that would be because it’s racist.

(And just for the record, I truly hope Abdollahi gets his citizenship. I’m just so tired of the interminable gamesmanship of identity politics and victimization.)

Technorati Tags: immigration reform,DREAM,Mohammad Abdollahi
Posted by DEWEY FROM DETROIT at 11:54 AM