Shut Up you Racist!

In the event that the “Shut-up” response as proposed by Klavan doesn’t work for the Left – which of course it didn’t at last Wednesday’s tea parties – they will whip out the infallible Liberal response to all things right of center: “You’re a racist! An ignorant, brain-dead psychopathic racist!”

Pul-eeeze, Janeane. Stuff a sock in it. I realize that you are much more intelligent and much better educated, informed and enlightened  than we ignoramuses of small brain. That’s why you have a degree in American Studies, that’s a tough one, no? And that’s why Keith Olberman let’s you run on  and on. You’re the only person on earth that makes him look intelligent. 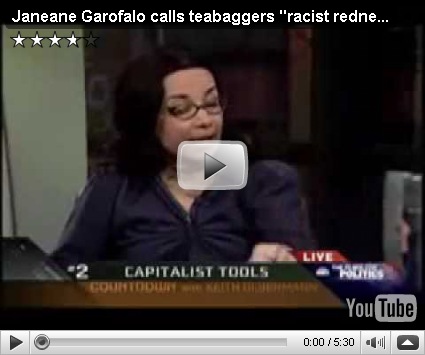 Well, try pushing all that brain matter around in your huge skull and figure out how exerting one’s First Amendment right to protest actions by the government equates to racism. I’m sure that was covered somewhere in American studies. No? You can get back to me on that. And by the way, it’s an open book test.

Bonus Q&A from Janeane’s interview with the Village Voice (another adventure in what passes for intelligence in an alternative universe):

And so are you Janey.  At least as qualified as you are to run off at the mouth. Besides, what’s one more comedian in office who thinks that everyone that disagrees with her is a racist, sexist homophobe moron.

And oh by the way – nice tats.