Let the Controversy at Notre Dame Rage On

This gem is lifted in whole from Barack Obama's Teleprompter's Blog. You really should visit if you haven’t yet. Nobody does Barry better. 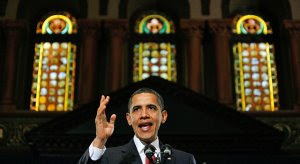 Given that some of you may be church-going folk, I thought Sunday might be a good time to address the controversy from last week at Georgetown, where the White House asked the school to obscure a symbol of Jesus Christ that was in the background of the room where Big Guy spoke.
A lot of people have misconstrued the request to cover the "IHS" symbol that would have been over Big Guy's head during the speech.  It wasn't that he was anti-religious.  He just didn't want to confuse all of you. Big Guy is the messiah, but he's not the Messiah ... at least not yet.  I think.  Anyway, one messiah in a room at one time is enough, don't you think?  Two would have just been overkill.