Wow. I barely get a chance to publish the  "Katie Couric Journalist Propagandist" of the year post, and along comes this gem to underscore my point. It’s going to be a great day: 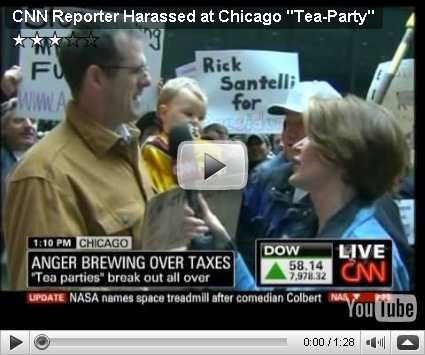 Susan Roesgen can’t spit out those Democratic talking points quickly enough, nor can she cut this man with the baby off quickly enough when he gets “off point”. I love her cut away line: “this is inappropriate for family viewing,” uh, yes. But for reasons other than those she considered (for crying out loud, he was talking about liberty when she yanked the mic.)

Meanwhile over at MSNBC, tax day tea party coverage really was inappropriate for family viewing. Keith Olberman, Rachel Maddow, Anna Marie Cox and David Schuster have been yucking  it up like  a gaggle of sophomores all week about the “tea baggers” – which is, for those of you not in on the “joke,”   a crude term for oral sex of a kinky persuasion. That’s what passes for news amongst the MSM intelligentsia. But hey, it’s ok. After all, they won.