You no doubt missed President Obama’s weekly radio address last Saturday: Stopping Oil Market Fraud, Beginning a Clean Energy Future, but you should read it, because you’ll be hearing it again and again. It’s another campaign speech. It explains his administration’s energy policy in a nutshell: Bush started it, the capitalists are manipulating it and our only salvation is “green,” “renewable” energy. That will take us places we’ve never been before. WTF (Winning The Future, I mean).

On Thursday, my Attorney General also launched a task force with just one job: rooting out cases of fraud or manipulation in the oil markets that might affect gas prices, including any illegal activity by traders and speculators.  We’re going to make sure that no one is taking advantage of the American people for their own short-term gain.

And don’t forget to demonize the producers who are using legitimate, authorized tax credits to hold costs down:

And another step we need to take is to finally end the $4 billion in taxpayer subsidies we give to the oil and gas companies each year.  That’s $4 billion of your money going to these companies when they’re making record profits and you’re paying near record prices at the pump.  It has to stop.

Because, naturally, if you make it more expensive for oil and gas companies to produce their product, that will ensure that consumer prices drop, right? Who writes this crap for the President? Have they ever taken Economics 101? Duh – silly me. They probably have PhDs in Economics: the “hairdressers” of the financial world.

Secondly, keep humping for “green” energy, because that’s been proven to be real efficient and cost effective:

If by “long term” you mean the next century. By then, assuming government doesn’t get in the way, scientists and engineers will have developed a new generation of energy sources (hydrogen cells, fusion, non-food chain bio-energy?) based on real science that will make all of our early 21st century alternative investments in WTF (winning the future) obsolete. They’re already uneconomic, so obsolescence will be a blessing.

That’s the key to helping families at the pump and reducing our dependence on foreign oil.

Let me make sure I’ve got this straight: investing in clean renewable energy and “reducing our dependence on foreign oil” without increasing our drilling at home will help families at the pump? In what decade will that “help” arrive, Mr. President? And again I ask: who writes this crap for TOTUS/POTUS?

We can see that promise already.[ed. HOPE!] Thanks to an historic agreement we secured with all the major auto companies, we’re raising the fuel economy of cars and trucks in America, using hybrid technology and other advances.  As a result, if you buy a new car in the next few years, the better gas mileage is going to save you about $3,000 at the pump.

That claim is such unadulterated BS I barely know how to respond. First, waving a magic wand and producing an “agreement” doesn’t make it so. Especially if the technology to accomplish said noble objective doesn’t exist yet .

What we have here is a plan to increase the fuel economy of America’s cars and trucks developed by a group of government functionaries who know nothing about physics, engineering, production, manufacturing, or marketing . And this is going to save you money at the pump. Because the government said so.

So if you still have a job and can afford to buy a new car that will probably have to be a hybrid you’ll save money at the pump. But of course you can’t – afford to by a hybrid that is – even if you have a job. Because they cost too much to build. But don’t worry, we’ll get Congress to authorize subsidies on these new cars so that they will be priced artificially low and hopefully that will be enough to entice you into buying one: WTF (winning the future). And then, you’ll (maybe) save $3000 at the pump! Over the life of your car, which we’ll assume to be about 15 years. Assuming they make the unpopular cars and parts that long.  Oh and another thing; your state may come after the $3000 you saved, since they’ll be losing revenues on gas taxes.

Both Democrats and Republicans believe we need to reduce the deficit.  That’s where we agree.  The question we’re debating is how we do it.  I’ve proposed a balanced approach that cuts spending while still investing in things like education and clean energy that are so critical to creating jobs and opportunities for the middle class.  It’s a simple idea: we need to live within our means while at the same time investing in our future.

It’s a simple idea alright, living “within our means.” The problem is the President and the Democrats don’t get it.

So if I have this right, gas prices have doubled in the past 2 years and Obama (who’s been in office for over 2 years) is looking for someone’s ass to kick?  Is there a “hold harmless” clause in Obama’s Presidential  contract with America that I’m unaware of?

Does the President think we’ve forgotten that he’s the guy who promised to make coal fired generation plants “prohibitively expensive” during his campaign? Everything he’s done with respect to energy policy since he’s taken office has been designed to make energy more expensive, not less.

Let’s look at just a few actions that can be directly accredited to President Obama that may have contributed to the increase in the price of gas at the pump.

One of his first appointees, Stephen Chu,  Secretary of Energy, told the WSJ in September of 2008 "Somehow we have to figure out how to boost the price of gasoline to the levels in Europe," which were then running between $7-8 per gallon: nearly 3 times the cost of gas in the US at the time. So far he’s doing a good job achieving his goal.

Then we have Carol Browner, Obama’s director of the White House Office of Energy and Climate Change Policy who, until earlier this year, was a member of Socialists International. Not a group known for promoting the interests of any means of production let alone the energy business.

And then there is the man that Obama tried to anoint as his “Green Energy Czar, Van Jones. A man who recently summarized his energy philosophy thusly:

And there’s Kenneth Salazar, appointed Secretary of the Interior by Obama, whose first official act was to cancel 77 gas and oil leases in Utah where activists (including Robert Redford, guess whose campaign he contributed to) objected to the proximity of the leaseholds to National Parks. They believed it would “mar the landscape.” Maybe we should just make the entire country a national park and be done with drilling altogether. Later, Salazar cancelled leases in Colorado and Wyoming as well.

In January of 2010 President Obama announced that the EPA  - a regulatory agency granted legislative powers by  presidential fiat - issued “rules” that required biomass fuel production to triple over the next 10 years.  So the President’s EPA czar has effectively established an energy policy for the country. We’re  to run the economy on corn and sorghum.

“Advancing biomass and biofuel production holds the potential to create green jobs, which is one of the many ways the Obama Administration is working to rebuild and revitalize rural America,”

Isn’t it nice to see all of our federal agencies working together for a change to kill the fossil fuel industry in the US and hold America hostage to “green energy?” Energy, Agriculture, Interior and a few miscellaneous czars here and there, all working together with a single-minded purpose: getting the domestic cost of gasoline in line with what they pay in Europe, where this is considered a sweet ride: 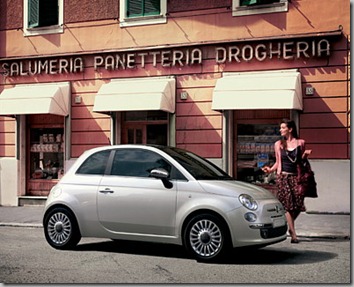 The theory of course is that we’d all stop driving and start clamoring for more mass transportation and  “alternative” energy sources, which your government stands ready to shell money out for; even though it is technologically unsound and economically non-viable. (emphasis added)

The energy content of wind flows and sunlight is unconcentrated, (sic) which means that massive amounts of land and materials have to be employed to make renewable power even technically practical. A 1,000-megawatt gas plant needs about 10-15 acres; a 1,000-megawatt wind farm needs about 50,000 acres (78 square miles). A square meter of solar receiving capacity even in theory is only sufficient to power one 100-watt light bulb; a solar plant of only 100 megawatts would require about 1,250 acres (2 square miles).

I wonder if the greenies feel that a 100 square mile solar field or wind farm would “mar the landscape,” or is it that designation only applicable to gas and oil rigs? 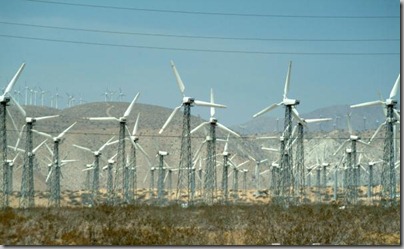 But when you are more concerned with an ideology than the economy, nothing is too impractical to promote.

And of course, President Obama has completely shut down drilling in the Gulf of Mexico – for American companies only, we’re lending money to others to drill there – and the Bureau of Ocean Energy Management Regulation and Enforcement continues to drag its feet on issuing permits. Even though daddy plugged the damn hole months ago.

So Mr. take-credit-for-all-the-good-stuff President, I think you can stop looking for someone’s ass to kick for the skyrocketing price at the pump. Not only do you deserve the credit for this  but you’ve worked pretty damn hard to ensure it happened. Take a bow. And while you’re down there, make like a Gumby and give himself a good swift kick in the hiney. 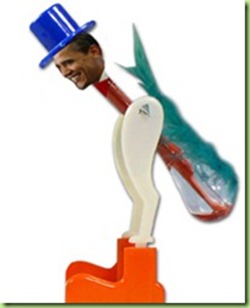 UPDATE: Doug Ross’ post provides an update on the EPA’s continued actions to ensure rising gas prices and demonstrates why the Gumby hiney maneuver is the correct action at this point:

The Environmental Protection Agency -- also known as the flat-Earth, no growth, taxpayer-funded, eco-Marxists (which is the term they prefer, I hear) -- is intentionally killing off domestic energy production. Presumably this makes good on at least one of President Obama's campaign promises -- in this case, that energy prices "will necessarily skyrocket." 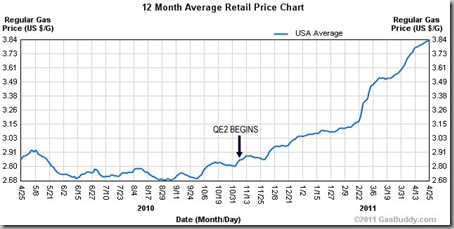 You may also be interested in An Ill Wind Blowing, and Pork: Your Tax Dollars at Work

Posted by DEWEY FROM DETROIT at 9:31 PM