I didn’t know Einstein, but you sir, are no Einstein. Trust me.

No, not the birth certificate. MOTUS covered that. Or if you’d like a slightly more analytical take on it, James Corsi still has some issues related to twin girls born the same day. Or there’s this, if you want an analysis of the likelihood that the long form is a forgery.

But no, what I’m referring to is an explanation of why Obama is such a crappy president. And from one of the Left’s own no less, Dana Milbank.

Obama’s strengths and weaknesses come from his high degree of “integrative complexity” — his ability to keep multiple variables and trade-offs in mind simultaneously. The integratively simple thinker — say, George W. Bush — has one universal organizing principle that dominates all others, while the integratively complex thinker — Obama — balances many competing goals.

Feeling better now? He’s crappy because he’s the smartest guy in the room.

Of course Milbank thinks that Obama dwells in “the center-left” so you should discount the rest of his political opinions simply on that basis. He proceeds to quote Philip Tetlock, a professor of psychology with the University of Pennsylvania’s Wharton School of Business, so you know that he’s an “integratively complex” thinker too:

Among the complex thinker’s advantages, says Tetlock, is the ability to see quickly the trade-offs among policy options, to update his beliefs after finding evidence that disproves his preconceptions, and to predict probable outcomes with accuracy. Among the disadvantages: The complex thinker can suffer from “analysis paralysis” and confusion; he can be perceived as unprincipled or disloyal to the values that elevated him to power; and he can be seen as too willing to make trade-offs.

That seems to conveniently cover all of his more obvious flaws, other than his tendency towards Marxist communism. It also sounds a lot like a legalese explanation from a Board of Directors as to why they felt it best to fire an incompetent CEO. Because when there’s a lot on the line, such as the survival of the company, nobody really gives a crap why the CEO is incompetent but they have to say something that can’t be construed as slanderous in a court of law.

As Professor Tetlock helpfully illustrates, an “integratively complex” brain, as opposed to a simpleton brain, has certain drawbacks in leadership positions:

A simple thinker such as Winston Churchill, for example, was a better answer to Adolf Hitler than the complex Neville Chamberlain. “Leaders need to be simple enough for people to relate to,” said Tetlock, “but complex enough to explain to people that they can’t have everything.” Obama was simple enough during his campaign, but, as president, became submerged in subtlety.

So in other words, when negotiating with other civilized gentlemen such as himself, Britain needed a Neville Chamberlain, but once a real threat emerged, it required a moron like Churchill.

And that’s not all that Obama’s massive intelligence has working against him: “But because Obama is unfailingly rational, opponents aren’t afraid of him doing something crazy.”

He wraps up the discussion by explaining that while complex rationality might normally be considered virtuous and advantageous, in politics they are distinct disadvantages, concluding that Obama’s best course of action at this point is to “not to be rational and fully honest.”  Many conservatives may well ask if anyone will notice.

So I believe a correct summary of Milbank’s position is that Obama is too smart, and the world too dangerous right now for a man of the President’s “integrative complexity” to lead the country. We need another moron. Like Churchill. Or maybe Reagan.

Let me know if you can think of anyone that could fill that bill. But, clearly, we must fire Obama…or…his teleprompter. I’m not sure which of them, if either, is “integratively complex” but I do know this: in order to be integratively complex, you must first know something about what you are trying to complexly integrate. 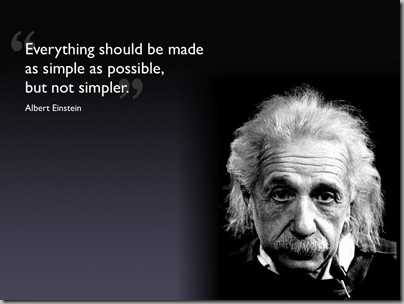 I didn’t know Einstein, but you sir, are no Einstein. Trust me.

Posted by DEWEY FROM DETROIT at 2:35 PM