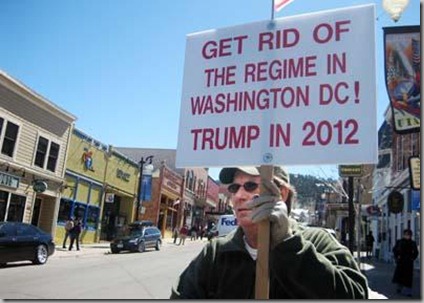 Are you tired of escalating fuel prices because Obama  opposes oil drilling anywhere, is threatening a carbon tax, shelved off shore drilling permits,  and is dragging his heels on shale oil and gas drilling?

Worried about food prices escalating out of control because of this country’s insane commitment to “green” “sustainable” energy that has resulted in subsidies  for the production of ethanol made out of the corn that ought to be fed to cattle, pigs, chickens and other high protein foodstuff?

Sick to death with the Washington budget dance between the party of “yes, yes YES!” and the party of No, not today, but maybe next week; and the threatened (“oh, I’m scared now!”) government shutdown?

If the ineptitude of this administration’s handling of foreign affairs, led by the Hen Hawk Troika, is causing daily acid reflux,  you’re tired of illegal court intervention in the legislative process in, of all places, Wisconsin, and the strident self-righteousness of public sector union leaves you with numbness in your left arm…allow me to share a little mountain town news that is a lot more fun, and only tangentially political.

Here in Park City, UT (population circa 8000, 2000 Hispanic) where we’ll be for another month, the local news is always vastly more entertaining than the national or international.

Before I begin there are some local demographic issues you should be aware of. For starters, despite Utah’s reputation as the reddest of red states with it’s predominantly Mormon population, Salt Lake City proper, 30 miles westbound and down the mountain, has succumbed to the same disease as every other large city that has both a University and a growing number of “underprivileged” residents (many “living in the shadows” i.e. illegals): it is a bastion of liberalism. It has a liberal Democratic mayor, a predominantly liberal Democratic City Council and a young population whose political priorities start with being green and end with gay rights. But by comparison it too is a conservative enclave; Park City being just a notch to the left of Southern California – from which many of it’s current residents have relocated.

So it was rather surprising to see the gentleman pictured above on Main Street in “downtown” Park City.  The story in the Park Record begins “The Donald would get at least one vote in Park City if he were to mount a White House campaign.” And possibly that would be the only vote he’d get, still it’s nice to see a little “diversity” in Park City.

Robert Novak, a Deer Valley resident (where the people with really BIG bucks live) is the one-man-band beating the drum for the Donald. Novak says he identifies with the Tea Party, and will be supporting Trump Mondays through Fridays on Main Street for the foreseeable future. It could get lonely out there.

Novak said most of the responses he’s gotten (so far) have been positive, with the exception of one person who yelled "go back to Cuba, you commie." No other clue regarding the background, political philosophy or IQ of that individual, although it’s fairly safe to say that he was educated in the public school system and knows nuthin’ about nuthin’. And isn’t ashamed to prove it.

But that wasn’t the only news in town, this week, as evidenced by the weekly Police Blotter that details everything from lost wallets to roaming livestock.

But the biggest story by far last week was related to the finding of dead chicken parts strewn along a major Park City thoroughfare. In Detroit, this is  considered littering, as dead chicken parts there are generally accompanied by cardboard cartons from KFC or Popeye’s. But here in Park City, which enjoys neither franchise, dead chickens found along the streets tends to indicate something a bit more… uh, spiritual:

An expert in ritual crimes and the occult said in December the earlier discoveries were telltale evidence of people practicing Santeria, a blend of ancient African religion and Catholicism brought to the New World in the slave trade.

Santeria adherents sacrifice animals in honor of Santerian gods and then leave the carcasses close to transportation corridors like pathways, railroad tracks and streams in honor of the means slaves used to move about. Sometimes pieces of cloth are tied to the carcasses, a symbol that the followers were honoring more than one god with the sacrifice. 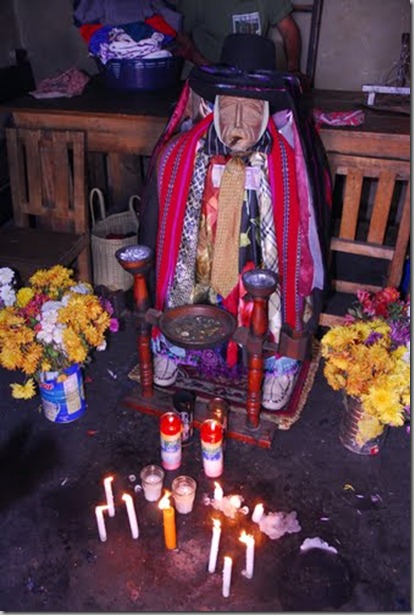 Santeria is one of several African diasporic religions that developed in the new world; strange amalgamations of African paganism and Christianity. Santeria, along with Voodoo, Hoodoo and Rastifari are Christian based syncretic religions from Latin America  while the Nation of Islam is a Muslim based American syncretic religion. (note: NOI now refers to Louis Farrakhan's splinter group from the original NOI - which now calls itself the American Society of Muslims. Even the Southern Poverty Law Center calls Louis’ NOI a “hate group.”).

All syncretic religions are an attempt to meld and reconcile different, often oppositional, principles, practices, or beliefs. By doing so the sect creates an artificial but “inclusive” approach to other faiths. And that’s why diversity and inclusion are so wonderful: it allows me to subvert my belief system in order to accommodate yours. Even when they are diametrically opposed.

But back to the Santeria revival in the mountains of Park City. I’ve done a little research and found that, while most religions imposed a cease and desist order on such ritual sacrifice over a millennium ago,  many of the Christian syncretic religions still practice such ritual killings. More importantly, the Supreme Court of the US ruled in 1993 that such activities are protected under the Free Exercise Clause of the First Amendment.

So here are my take-aways from the chicken incident: first, Park City residents better get used to fowl carcasses strewn around town as we’ve obviously embraced the diversity of the Latin American-African-diaspora syncretic religion of Santeria. And since it’s considered bad form to ask people about their citizenship status, let alone their religion, these practitioners of the religion of chicken pieces could be anyone: your neighbor or co-worker, your fast food server, your housekeeper, or your gardener. And since I’m not knowledgeable in all Santeria rites,  I’d suggest you not let your small dogs or cats out unattended, just in case it  includes other ritual animal executions.  It would be a good idea to keep an eye on your larger dogs too, as they’re likely to be attracted to the vermin infested chicken carcasses left around town emitting all sorts of aromas irresistible to canines. Let’s be careful out there. 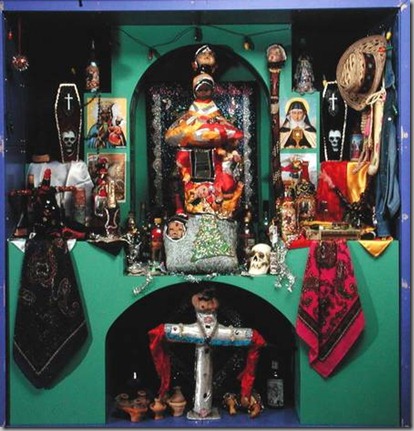 Secondly, since the Supreme Court decision has made it clear that practices associated with the beliefs of recognized religions (other than Christianity and in certain cases Judaism) are protected under our Constitution, I believe we have a quandary. The Islamic Fascist arm of the Religion of Peace firmly believes that Mohammad has commanded them to practice jihad against Jews, Christians and all other infidels who refuse to convert to their religion of peace  - which, to be clear, involves killing said non-believers.

Talk about being hoisted by your own petard.

So here’s my suggestion: we remove the religious designation and non-profit status from all mosques preaching and/or practicing Sharia law and/or jihad, and/or sending funds to others who practice Sharia law and/or jihad. Then we reclassify these groups for what they actually are: extremist political organizations committed to the takeover and transformation of all governments to Sharia law by any means possible. A political philosophy of blood lust and power. Not unlike Hitler and Stalin.

Perhaps the non-jihadist, non-sharia law Islamists, who we are told make up the vast majority of the practitioners of the religion of peace, might want to change the name of their religion of peace, something that doesn’t conjure up so many images of sedition.  And since they’ll be picking a new name for  their religion, perhaps they’d like to name it after one of their prophets who wasn’t a misogynist pedophile.

Posted by DEWEY FROM DETROIT at 3:46 PM