On Limited Government: What part of “Limited” do you not Understand? 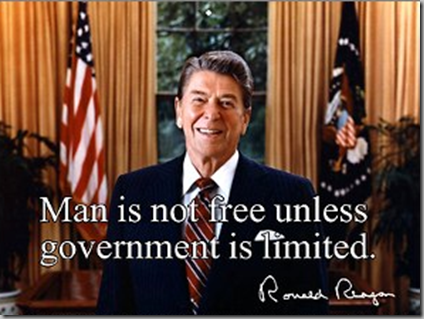 Apparently President Obama feels that portions of the spending bill that Congress just passed are unconstitutional, since his signing statement indicated as much:

One rider – Section 2262 — de-funds certain White House adviser positions – or “czars.” The president in his signing statement declares that he will not abide by it.

“The President has well-established authority to supervise and oversee the executive branch, and to obtain advice in furtherance of this supervisory authority,” he wrote. “The President also has the prerogative to obtain advice that will assist him in carrying out his constitutional responsibilities, and do so not only from executive branch officials and employees outside the White House, but also from advisers within it. Legislative efforts that significantly impede the President’s ability to exercise his supervisory and coordinating authorities or to obtain the views of the appropriate senior advisers violate the separation of powers by undermining the President’s ability to exercise his constitutional responsibilities and take care that the laws be faithfully executed.”…

In other words: we know what you wanted that provision to do, but we don’t think it’s constitutional, so we will interpret it differently than the way you meant it.

Not that he always felt that way: 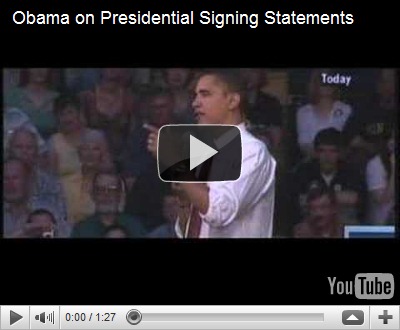 As Obama pointed out in his 2008 position on the issue of signing statements, he taught the Constitution for 10 years. If, during those 10 years, he was teaching those little legal beagles that it’s the job of the President of the United States and Commander in Chief to interpret the constitution, (and than act on that interpretation) it may explain a lot.

But it clearly sounded as though he understood that the President does not have the power to interpret legislation, and he even went so far as to say he absolutely wouldn’t use signage statements. Unless he has to.

Let me be clear: it wasn’t legal when George W. Bush did it, and it isn’t legal now. Pragmatism and expediency in the interest of getting your way is illegal, immoral and dangerous to our freedom and liberty.

Posted by DEWEY FROM DETROIT at 2:36 PM