Driving across country in the dead of winter is not for wusses or wimps. Even with clear skies overhead, fierce winds out of the south and west blow unabated across miles and miles of fallow fields in Iowa, Nebraska and the Dakotas. Winds of 25-50 mph are common, 50-60 mph not uncommon and gusts around 80 mph are no strangers to this landscape. Snow that has already fallen and should be earthbound takes to the air again as it’s aroused and freshly provoked. The wind’s velocity whips it into a reincarnated blizzard. Once again visibility approaches zero and highways become ice glazed within the time it takes to travel between exits. 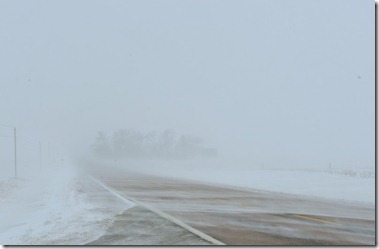 Old snow, wearing itself out in Nebraska

There’s long been a saying on the Plains that: “Snow around here doesn’t so much melt as it wears itself out.” You don’t want to be on the road while it’s exercising itself to exhaustion.

As you leave America’s bread basket (Is this term still operative? Or is it an anachronism now that we’ve shifted our subsidies to the growing of corn for ethanol?) via I –80 in west Nebraska you enter Wyoming. Here the hazard of flatlands snow and ice is anted up in spades. By the time you reach Cheyenne, which is located just inside the extreme southeast corner of the state, you’ve already climbed to 6ooo feet. The rest of the trip across the state takes you up to 9ooo feet and back down to 6000 feet multiple times as you climb and descend through a series of mountain passes that transport you across the Continental Divide. The danger of ice slicked roads on top of the world is a fact apparently lost on the would-be ice road truckers who have to settle for ice-glazed highways to live their dreams. Many are underpowered and drop to 20 mph (or slower) in order to make it up grade, and then - in order to conserve fuel – barrel down the declines at breakneck speed. It’s an unusual winter trip where you won’t see several jackknifed trailers strewn along the trail.

There are few cities or towns along the entire length of the Interstate that traverses Wyoming east to west, and you best plan accordingly because this is fool’s territory. There are still places where your cell phone is silent, and even satellite radio has trouble broadcasting with all the rocks.

To be sure, we have been fools in the past. We’ve been making this trek, in one direction or another, 4 times a year for over a decade. We gradually learned how to access the most reliable weather forecasts (NOAA – so don’t say I’ve never said anything nice about the federal government). Then we learned that its equally if not more important to check for wind forecasts  along with precipitation. And finally we learned, late one April as the highway closed behind when we stopped for the night, that the high, dry dessert gets the majority of it’s snowfall in March and April. Easter is perhaps not the best time to travel.  Even armed with all this information, it’s still a crap shoot. The vagaries of weather over the span of a 3 day cross country hike make planning somewhat irrelevant, but the one constant you can count on in Wyoming is wind.

So it’s not the least bit surprising that several of the largest U.S. wind farm projects are in Wyoming. 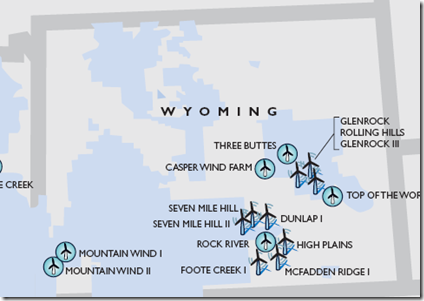 The winds along the Rocky Mountain ranges in the Cowboy State are some of the strongest and most reliable in the country, so you’ll see ample evidence from the highway of these corporate wind “farmers”  “harvesting” all that “free, green” energy. In an affront to both physics and aesthetics, these mindless monsters sprout from the mountain tops like perpetual steel geysers top-mounted with 747 fuselages and rotors 46 feet long. They rise like a temple to modern man’s ability to built things with erector sets. An artifact of the age of matter over mind.

They are pretty big suckers: height of 126 feet, with a rotor radius of 46 feet. This illustrates one of the Foote Creek models. They come much larger: some are 400 feet tall, with 130 foot blades. 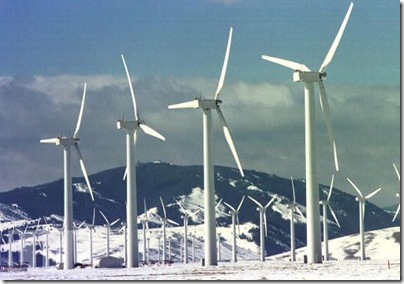 Foote Creek wind farm in WY Rockies: a triumph of might over right

Never mind that these monsters fail to perform their appointed rounds much of the time – due to machinery malfunction or lack of adequate wind (although in fairness, that’s less likely in Wyoming than in some locations that have fallen for windmills’ clean energy charm).  And never mind that Wyoming is filled with reserves of oil and natural gas that - in terms of thermodynamics - “delivers more bang for the buck.”

Some find them lovely to look at:  I suppose beauty is in the eye of the beholder. But for environmentalists, so offended by the sight of gas wells,  it’s hard to imagine how they justify the landscape pollution of these monstrosities. In addition to thrusting themselves into the air 400 feet, they make an awful lot of noise, kill a lot of birds and bats, 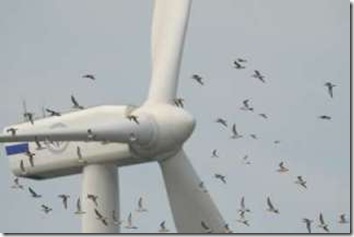 and - if operating improperly, which is apparently not that rare - throw off huge ice sheets that can cause tremendous damage to buildings and people. And while not one life has ever been lost due to a malfunction in a nuclear reactor in the U.S., the wind turbine industry - darling of clean, green safe energy - suffers dozens of deaths each year, primarily as a result of falls during assembly and maintenance. Because, as you can see, their working parts are really a long, long way off the ground. 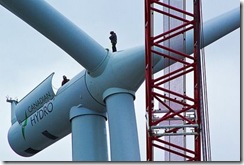 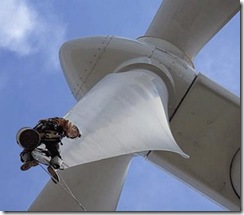 Never mind that from a thermo-dynamic stand point, wind generated electricity is not very efficient even if the fuel source is “free.”  The upfront cost of building the turbine generator is 80% higher than for conventional electricity generation facilities. And since the power generated is not storable and unlikely to be generated anywhere near a location that needs the electricity,  it requires massive capital to build electric grid transmission lines and/or astronomically expensive and inefficient batteries for storage. 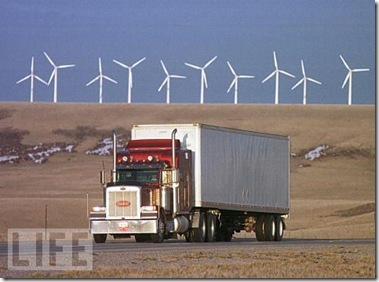 Nobody here but us truckers

Add to that the fact that any market relying on wind generated electricity also needs to arrange for reliable, alternate sourced generation capacity because nature is fickle and we don’t always know which way the wind blows.

Nor is wind energy as clean and simple as the Greens would have you believe. Although the technology for wind turbine generated power is not anywhere near as complex as (horrors!) a coal fired generation facility or a nuclear plant, crap still happens:

Despite assurances from the American Wind Industry that turbines shut off when there is any ice build up on the blades, all you need to do to disprove this is a search on YouTube for “Wind Turbine Ice Throw.” Here’s one example. Other problems can be found under Wind Turbine Explosion or  Wind Turbine Fire.

In a fair and balanced nutshell, from America’s Economic Report - Daily, the current status of alternative energy sources:

There is nothing wrong with solar and wind energy. They are clean, renewable, and spur domestic investment. However, they are also disproportionately costly, and they take up a lot of space. Wind and solar power offer weak comparisons to old-school oil, gas, and coal, which have large infrastructures already in place and are the “tried and true” means of producing electricity.

While Wyoming, and nearly every other state that can claim any wind at all, is being littered with turbines, proven gas and oil reserves in many parts of the nation are untapped for a variety of reasons, but not insignificantly due to Federal regulatory restrictions. The Gulf of Mexico drilling ban  is just the tip of the iceberg.

Obama’s Interior Department last December removed 250 million acres of federally owned land from gas and oil production by “deeming” it to be a “wilderness study area” area.  70% of the Green River Formation reserve in Utah and Wyoming are now off limits to production due to this land grab by “unelected central planning ‘experts’ in the Obama Administration.” This formation just happens to contain the largest reserves of shale gas in the world ( 1.5 trillion, yes, trillion, barrels of oil equivalent). In the bureaucratic sweep of the Interior Czar’s hand, the boom that Wyoming has been enjoying in the middle of a very, very bad recession is about to come to a screeching halt.

A good number of the jobs created as a fallout of drilling activity in this state are about to dry up like the parched landscape here and blow away with the tumbleweeds. 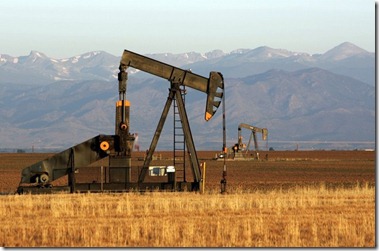 Allow me, as a drive-by observer of the landscape, to document my evidence of how “trickle down” economics actually work in the real world - removed from the input of our intellectual betters dwelling in Washington and universities across the country.

Fueled by a previously healthy gas and oil drilling industry in the state of Wyoming, many other jobs emerged. Here are my observations:

So once again, kudos to Obama and the Liberals. They’ll soon have another state contributing to the country’s unemployment rate.

Or maybe they’re planning to re-deploy them all into the windmill business? After all, it is free, clean and green! 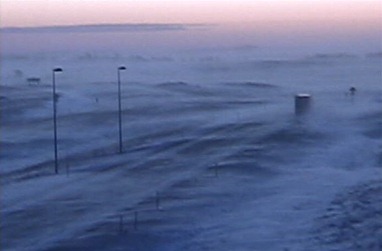 Winds, wearing the snow out, on I-80 outside Vedauwoo, WY

Posted by DEWEY FROM DETROIT at 7:07 PM