Page One: A year inside the New York Times 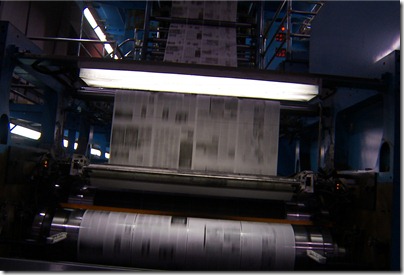 Page One: hot off the presses

There is nothing that filmmakers enjoy more than a good documentary about themselves. Absent that, they’ll settle for one about their kissing cousin: the media.  This year’s Sundance documentary lineup includes two documentaries from this branch of the family. Page One: a Year Inside the New York Times is a narrative on the the importance of print media in the age of the internet, and Miss Representation, which is an expose of the rampant sexism in the print and film media.

I’ll start with Page One, as described in the official Sundance Festival catalogue:

Page One chronicles the media industry’s transformation and assesses the high stakes for democracy if in-depth investigative reporting becomes extinct.

At the media desk, a dialectical play-within-a-play transpires as writers like salty David Carr track print journalism’s metamorphosis even as their own paper struggles to stay vital and solvent. Meanwhile, rigorous journalism—including vibrant cross-cubicle debate and collaboration, tenacious jockeying for on-record quotes, and skillful page-one pitching—is alive and well. The resources, intellectual capital, stamina, and self-awareness mobilized when it counts attest there are no shortcuts when analyzing and reporting complex truths.

The documentary is as full of hot air as the synopsis. And never mind the fact that in-depth honest investigative reporting went the way of the dodo bird at the NYT years ago. It’s apparent from the puff piece that the director, Andrew Rossi, holds the NYT in high regard; no doubt due to his Yale and Harvard education. Even more apparent however is that no one holds the NYT in as high regard as they do themselves.

If you think “a year in the life” implies a chronological documentary that has a point you’d be wrong on two counts. Instead of a chronological examination of  the state of the newspaper business today it’s a disjointed trip through the process of story assembly meant to impress with its seriousness of purpose. The common element running through a lot of unconnected stories and tangential asides is David Carr, an old line writer and ex-coke head, on the media desk. We mostly follow him through the process of  getting a story and getting it out. He’s also the true believer and  senior proselytizer of the  "New York Times exceptionalism." New York Times exceptionalism, yes. American exceptionalism, no.

Interesting gambits, such as the NYT decision to publish the initial Wikileaks documents last April promise to be interesting but are dead ended. There is no access to top brass who might shed light on the paper’s belief that it was the right thing to do. Instead we see the reporters hashing  the decision out amongst themselves which doesn’t advance the argument much beyond the hackneyed and inaccurate comparison of Wikileaks to the Pentagon Papers.

Ultimately, the documentary is too little core story and analysis and too much hopeful belief in the eternal flame of print media as embodied by the Old Gray Lady. By the time you’ve figured that out, you’ve grown weary of all these self-important twits anyway. Their craft was once vitally important. With the new-media, sorry, not so much.

However it would seem that Mr. Rossi, and certainly the subjects of the documentary, disagree. Their conclusion is more or less the newspaper equivalent of  “rock and roll will never die.” Ok, if you say so. After all, it is the paper of record.

Page One has been picked up for distribution by Magnolia Pictures and Participant Media. Watch for it soon at an art theatre near you that screens “important,” socially conscious films.

Posted by DEWEY FROM DETROIT at 1:01 AM