“Nothing in all the world is more dangerous than sincere ignorance and conscientious stupidity.” MLK

He still stands head and shoulders above other opportunistic would-be Black leaders. 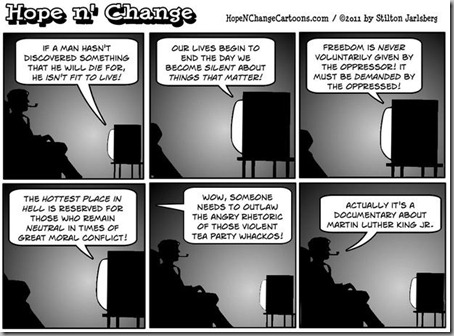 Read Stilton’s Hope n’ Change commentary on RightNetWork regarding the place for rhetoric – even the rancorous kind – in our national discourse.

Meanwhile, it appears that CAIR has cynically hijacked MLK Day for their own purposes, in Washington state, knowing that Black demagogues like Jackson and Sharpton will voice no objections, in order to appear to be “inclusive” of other “oppressed” peoples. 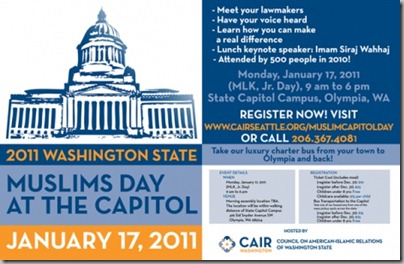 They should be ashamed of their complicity with such a sham.

Martin Luther King would not appreciate it. Especially considering the fact that some Muslims think that Blacks still make great slaves.

Posted by DEWEY FROM DETROIT at 10:50 AM