In Defense of Incivility 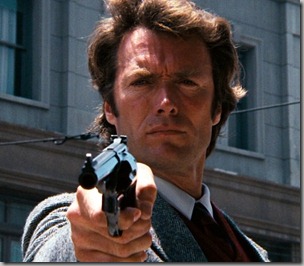 Is that possible? To defend incivility? I realize that in the minds of the left, who are all of a sudden demanding civility, it’s probably uncivil to even ask. But if I may quote the words of a great man whose birthday we celebrated yesterday:

“Our lives begin to end the day we become silent about things that matter.” - Martin Luther King

And if that means that those of us who simply don’t believe that  socialist-Marxism is the last-best-hope of humanity feel compelled to be a bit strident about it, well, so be it.

As Vanderleun notes in Civil Myass: How About We DON’T Tone It Down for a Change?  accepting the left’s charge of incivility violates William F. Buckley’s first principle of debate: Never accept your opponent’s premise. Get your opponent to accept yours.

He points out that instead of employing that tactic the right is, predictably, falling for the oldest trick in the book:

The left not only expects the “nice guys” of the “rational right” to come around to their way of thinking, they depend upon it. And they should since that’s been the pattern of these things for as long as I can remember.

I’ve even tried this a couple of times but, alas, no longer. My nice, reasonable right guy is all used up these days. I've got compassion fatigue. I see the left dealing, once again, from the bottom of their media marked card deck (when do they do otherwise?), and I’m not feeling too civil about them and their plans these days. I've seen enough of their "handful of 'gimme' and mouth full of 'gimme more'."

Speaking for myself -- in a calm and rational tone as I reach to upset their crooked card table and draw my metaphoric popcult pistol -- I have to say, “I know what you're thinking. ‘Did he fire six insults or only five? Well, to tell you the truth, in all this excitement I kind of lost track myself. But being as we're playing for the future of the Republic, and being as this is a 2010 iMac, the most powerful personal computer in the world, and would blow your premise clean off, you've got to ask yourself one question: Do I feel lucky? Well, do ya, punk? ”

This message has been brought to you by the Clint Eastwood, ex-Mayor of Carmel-By-The-Sea fan club. Dirty Harry ran his 1986 campaign for mayor of Carmel on the sole platform of  legalizing the sale of ice cream cones from storefronts. A true American hero.

Not clear where our nanny-state loving POTUS and FLOTUS  would come down on this, as they would have to be somewhat conflicted. 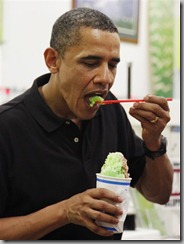 PS. If you haven’t seen Grand Torino (shot in Detroit) yet you really must. It’s rough, but good. Kind of like Detroit used to be.

Duke: What you lookin' at old man?
Walt Kowalski: Ever notice how you come across somebody once in a while you shouldn't have f***ed with? That's me.

Sorry, that was rather uncivilized of me.

Posted by DEWEY FROM DETROIT at 2:05 PM