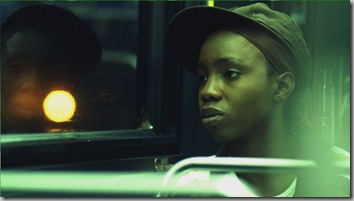 If you were thinking: “what Sundance really needs are more black lesbian coming-of-age flicks” then this is your lucky year. Pariah opened Thursday to (predictably)  a “hugely enthusiastic reception.”

Because this is what they read in the Sundance Festival 2011 catalogue about this film:

At the club, the music thumps, go-go dancers twirl, shorties gyrate on the dance floor while studs play it cool, and adorably naive 17-year-old Alike takes in the scene with her jaw dropped in amazement. Meanwhile, her buddy Laura, in between macking the ladies and flexing her butch bravado, is trying to help Alike get her cherry popped. This is Alike’s first world. Her second world is calling on her cell to remind her of her curfew. On the bus ride home to Brooklyn, Alike sheds her baseball cap and polo shirt, puts her earrings back in, and tries to look like the feminine, obedient girl her conservative family expects.

So far it sounds like a natural for Oprah’s new network.

Alike (Adepero Oduye) struggles (see above) with coming to grips with her sexuality. She knows she’s a lesbian, she just doesn’t know what kind of a lesbian: the butch type that her friend Laura  (Pernell Walker) wants her to be or the sensitive type that her new friend,  Bina (Aasha Davis), thinks she’s destined to be. The main premise seems to be that the path down which a black teen lesbian’s life must necessarily travel is tough enough, without your conservative parents layering on additional expectations and guilt. Keeping your overt sexuality – no matter which way it goes -  in check until you’re maturity catches up with your teenage libido is apparently never an option any more. Neither in Hollywood nor the real world.

Ms. Rees (who is both screenwriter and director) dug way down in the stereotype bin to come up with  a sketch for a “conservative” family: children living with both of their biological parents who expect their daughters to go to school, study, get good grades, stay out of trouble and go to church on Sunday. Oh yes, and a completely intolerant, unyielding mother who cannot come to terms with her daughter’s budding homosexuality in any healthy way.  She’s driven mad by her daughter’s sexual orientation. Because that’s how conservative parents behave when they find out one of their children or grandchildren is gay, right? Just ask Dick and Lynn Cheney. Or Barry Goldwater.

The Dee Rees movie started life as a short film made for her NYU film school thesis under the tutelage of Spike Lee, the school’s artistic director. With help from the Sundance Institute - cuz that’s what they’re here for - it was turned into a feature length film that many here have already dubbed this year’s “Precious.”

Precious was  a 2009 Sundance feature about an obese, abused, illiterate black teenage girl pregnant with her second child - by her own father. Not quite as earth wrenching as a teen living with a loving nuclear family and trying to figure which side of the lesbian equation to settle on, but not bad.  Precious  went on to win awards everywhere it was screened.

What the two movies have in common, aside from being about black teenage girls, is that they both make people cry and are what has come to be known as “difficult” movies to watch. Which is to say they’re very unpleasant to watch. The depiction of sick, twisted behavior on screen is ostensibly to develop the viewers “understanding” of the characters, but in fact it’s there to manipulate the viewers emotions. Some people think that’s what art does. But they’re wrong: real art is, well, real. There’s no need to manipulate. Real art can shock without grossing everyone out in the process.

But filmmakers will generally stick with the gross out, because it is an effective technique for today’s audience. Hollywood, in conjunction with the rest of the MSM, has created a population trained to have their emotions revved while their intellect sits in neutral. Emotional Reaction ‘R Us. But it pays off.  Precious  was nominated for 3 Oscars and took home the Best Supporting Actress statue.

Don’t  look for anything similar from Pariah. Although all of the other Sundance reviews will praise it’s honesty, rawness and ability to tell it’s own story, the reality is it’s too long,  too grim, too black lesbian-coming-of-age and way, way  TMI. Do you really need to see a teenage girl’s first experience with a strap-on? I think not.

Plus it also has other real flaws, like insufficient character development (for example from whence does  the fear and loathing that Alike’s mother has for her daughter’s homosexuality come from?  Are we to presume it’s because she goes to church?) and loose ends in the script. Technically, it’s not ready for prime time even though most of the acting is fine.

Nevertheless, look for IFC or one of the other cables to option it.

Posted by DEWEY FROM DETROIT at 6:07 PM