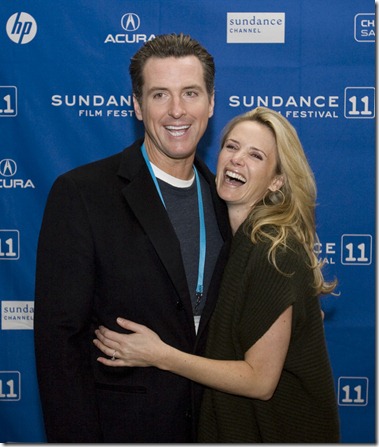 Miss Representation conceived and directed by Jennifer Siebel Newsom “Explores the under-representation of women in positions of power and influence in America, and challenges the media's limited portrayal of what it means to be a powerful woman.”

Wow. This is almost as big an expose as Wikileaks.  More, from the official Sundance Film Guide:

Like drawing back a curtain to let bright light stream in, Miss Representation uncovers a glaring reality we live with every day but fail to see. It’s clear the mainstream media objectifies women, but what most people don’t realize is the magnitude of that phenomenon and the way objectification gets internalized—a symbolic annihilation of self-worth—and impedes girls and women from realizing their full potential.

Not much hyperbole there.

In a society where media is the most persuasive force shaping cultural norms, the collective message that a woman’s value and power lie only in her youth, beauty, and sexuality is pervasive.

Ms. Siebel Newsom, the film’s creator,  is the 2nd wife of Gavin  Newsom, who was Mayor of San Francisco until earlier this month when he left to become Governor Moonbeam’s Lieutenant Governor. Two things you should know about Ms. Siebel Newsom: 1) she’s 35, an age when woman are just broaching the peak of their self-conferred powers and cannot  yet imagine losing their looks and sex appeal. And 2) she is an actress, but has never gotten a really good Oscar contention part, probably because there “just aren’t that many good roles for women.” Ironically, Ms. Siebel Newsom’s  project looks like it was made by woman a  little too full of her self and her power.

Her Documentary,  Miss Representation, “takes to task the media for its limited and often disparaging portrayals of women.”

Not to undermine her  message, but rather, I assume,  to clearly illustrate it, Jenny has starred in a few of these “limited” and “disparaging portrayals of women” herself;  for example: The Trouble With Love in which she provides the acting for a  full nudity, raunchy three-way. I’m sure that was good for her self-esteem.

She does not address her role in The Trouble With Love directly, but writing about the release of the documentary on her blog we may infer that Ms. Siebel Newsom has had a change of heart since that movie was made – way back in 2008:

“When I gave birth to our daughter, Montana, I felt the stakes rising. I was frightened for her to grow up in a world that was so limiting for girls and women.”

Where the hell do you live Jennifer, Tehran?

Progressives are constantly trolling around for the next victim group to use for their purposes. Feminism has now been around so long it’s fair game for exploitation again. That must make Gloria Steinem feel really, really old. 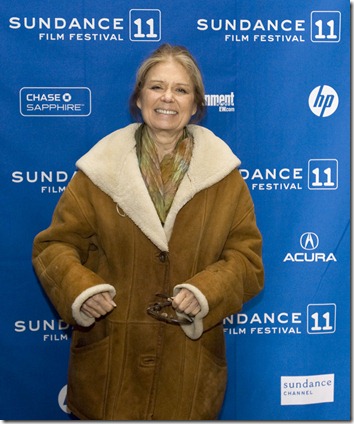 Gloria, at premiere of Miss Representation

So I’ll buy the fact that the media continues to objectify women, duh. But just because the country is littered with morons obsessed with celebrities, and most female celebrities aren’t suitable role models for barn cats does not negate the fact that women are functioning quite effectively in every career, industry and political party in this country. Can we stop whining and get on with it?

Apparently not. Miss Representation is a screed against all the usual suspects in the exploitation of women: the entertainment business in general: movies, TV, news rooms and the advertisers that enable them, the fashion industry and of course the FCC for not regulating it adequately. Particular scorn is heaped upon reality shows, no-talent celebrities famous only for being skanks, and fashion magazines. Yawn.

The documentary contains dozens of statistics (many of which are suspect, if you have an inquiring mind) supporting it’s thesis, zillions of images that demonstrate exactly the female objectification Ms. Siebel Newsom is talking about:  egregiously hyper-sexualized eye candy  (Well, she is looking for a distribution deal.) It also contains dozens of  interviews with a fair and balanced panel of experts: Nancy Pelosi, Katie Couric ,Rachel Maddow, Gloria Steinem,Diane Feinstein, Jane Fonda – and just to balance things out - Condoleeza Rice.

The last 15 minutes of the doc was spent presenting Ms. Siebel Newsom’s solutions to the age-old problem of female exploitation. Many documentaries don’t feel compelled to offer solutions. Because this one seems  like a thesis in Women’s Studies, it’s probably appropriate for it to attempt a resolution. Unfortunately, the documentarian isn’t quite up to the task; most of the suggestions are silly and/or obvious. But then, if it were easy I suppose a caveman would have done it.

Beyond the doc’s premise, Miss Representation has other issues: an unseemly amount of self injection and reflection by Siebel Newsom, and the gratuitous clips of Gavin Newsom are unsettling, as you imagine them to be there simply for use in future campaign footage. And a strange absence: in a bombast on the objectification of women in the media, not one word about the extremely misogynistic music/video business that thrives on such drek.

In our very less than perfect culture the burden falls on parents to neutralize the poison that permeates pop culture. Parents are the ones who can and  should shape and form their children’s values. Until the disintegration of the family has been reversed, don’t expect any mandated or voluntary action to reverse the swill coming out of Hollywood. Pop culture will respond when the majority demands something better. We aren’t there. Until then, teach the children well.

I understand Gavin and Jennifer are expecting their second child. Congratulations. Stop being “frightened for her to grow up in a world that was so limiting for girls and women.” It isn’t. And you’ve got a lot more important things to worry about than that.

Posted by DEWEY FROM DETROIT at 7:00 AM