This is the most robust deficit ever. Deal with it.

Accounting is really quite simple. Rule #1: Revenues minus expenses equals your profit or loss. In government the “expenses” are referred to as expenditures and since government isn’t in business to make a profit (at least not in the conventional sense) the bottom line becomes either a surplus (good) or a deficit (bad).

While there are some differences between business accounting and government accounting, the essentials are the same. Revenue is recorded only once, because you can only spend it once (heh). And expenditures, obviously, are counted only once as well. So simple a caveman could do it.

If you knowingly misrepresent revenues and/or expenditures, that’s fraud. You could go to jail. Unless you’re in Congress, or a senior Administration official. In those cases, and those cases alone, all rules are waived.

In related news, President Obama lectured the Republicans in his Weakly Address on the budget, saying – I kid you not -

“We need a government that lives within its means.” 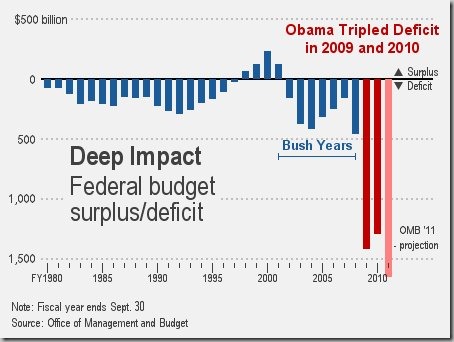 So far so good

Apparently, according to a Republican source, he told members of Congress the same thing last week:

After he signed the short-term bill yesterday, President Obama said in a statement, “I’m calling on Democratic and Republican leaders of Congress to begin meeting immediately with the Vice President, my Chief of Staff, and Budget Director so we can find common ground on a budget that makes sure we are living within our means.”

Saying that this country must live within its means is an audacious statement coming from a president who championed an $814 billion failed stimulus bill, all of which was paid for with deficit spending. It’s audacious coming from an administration that is leading the country into another consecutive year with a deficit over a trillion dollars. And it’s audacious coming from a White House that proposed a budget for the following fiscal year that grows the debt to $20 trillion in five years and never once in a decade spends less than it’s taking in.

Hey, cut the guy some slack: he didn’t have any administrative, budgetary or leadership experience when he got here; he’s still learning how to ruin run the country. Besides, he just got the memo on the deficit last week. Well OK, maybe he got it before then, but no one had time to read it to him. And even when they did, it was an extraordinary amount of data to process, and he wasn’t perfectly clear on exactly what a deficit was. He thought it looked pretty robust. 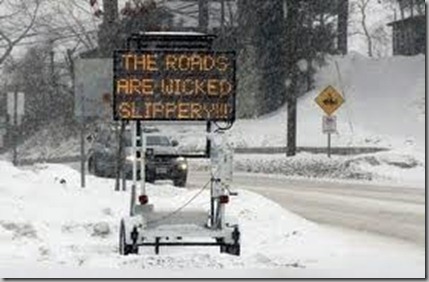 The roads are slippery and the drivers are drunk. What could go wrong?

Posted by DEWEY FROM DETROIT at 8:12 PM