Frankly, Sean Penn could be the designated pigeon for this feature every single week. But that would be unfair to the rest of the bubble heads of celebrity who think we should care about their idiotic, anti-American, pro-statism causes and ideas too.

Never the less, I’m calling it for Sean this week; for his multiple contributions of late to the world of STFU.

For starters, there’s his life-time achievement award in the “I-heart-Hugo” category. 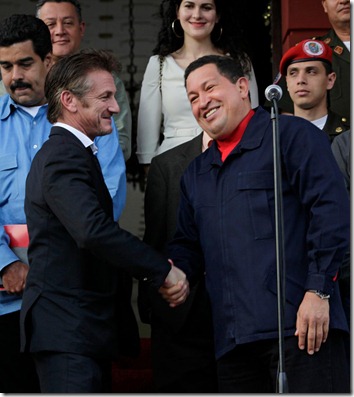 Most recently, Penn thanked and praised Chavez for supporting his Haitian relief organization (although there was no disclosure of the amount). To be fair, Penn also thanked the US military for their donation to his organization, although he called it “ironic.” Didn’t anyone ever tell this jackal not to look a gift horse in the mouth?

But Penn and others of his ilk (Oliver Stone and Joe Kennedy come immediately to mind) who feel that Hugo is the Robin Hood of South America would do well to heed their mother’s  admonition that people judge you by the company you keep.

So if your buddy (Chavez) is a good buddy to another ruthless dictator, (Qaddafi) that should give you pause. The Ruthless World Dictators Club is relatively small, and not known to be populated by humanitarians.  In light of that, most people would choose not to nurture this relationship. But if you are among the gifted class, the artists who are more sensitive and more insightful than the rest of the us, you see things that we slugs miss.  Where the rest of the world sees the heart of a malevolent tyrant, you see the psyche of a guileless little boy who means well, but is constantly misunderstood by all the dolts wielding the real power.

Which brings me to Sean’s other bad-boy buddy: Charlie Sheen (last week’s recipient – duh!).  In another astute observation, Penn has determined that spending some time with his buddy, and taking him to see some real people in need, is exactly what Charlie needs to be rehabilitated.  As with Chavez, Penn’s keenly sensitive nature allows him to discern what the rest of us just miss:

"When you divorce the moral judgments, which I prefer to do, [ed. of course you do] I see a guy who has a clearer view of the nature of the world around him than is sometimes comfortable to have."

Yes. Cocaine can do that for you. And who would be comfortable with Adonis DNA, tiger blood and being a rock star from Mars? So by all means, Sean, take him to your aid-camp in Haiti. That should get his head straight. And I’m sure all the homeless people there will appreciate being pitied by a rock star. From Mars.

Let’s look at another fellow traveler of Penn’s; Oliver Stone. He recently released an ode to Hugo Chavez in the form of his newest movie  South of the Border.  The film is so fraudulently biased that even the usually reliable progressive press called it propaganda, and, in perhaps the unkindest cut of all, Entertainment Weekly called it “rose-colored agitprop.”  Whew. That’s harsh. If that’s the best you can churn, that’s some weak cheese packed in your crock, my man.

Earlier this week Sean, in a show of Hollywood solidarity for another well meaning film director, Julian Schnabel, showed up at the screening of Miral at the UN. The movie, about the plight of a young Palestinian girl, was denounced by Jewish groups as being anti-Israeli. No. Really? To be clear, they aren’t trying to  to block its release. They just feel that the US premiere being held at the United Nations – a rather unusual venue for any film premiere – is inappropriate, on the grounds that it “portrays Israel in a highly negative light” and was intended as a politically charged referendum. Their request was denied. 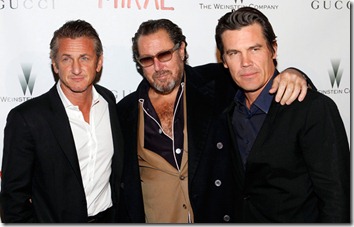 Penn, Robert De Niro and Josh Brolin joined their friend Schnabel and his girlfriend,  Rula Jebreal, author of the semi-autobiographical novel on which the film is based, at the UN showing.

Enough good deeds for one week Sean. Now take a break from activism and please go back to acting. Everyone says you’re a pretty good thespian. So please just act, make a lot of money and give it all away to who and whatever you think deserves it. I just don’t want to hear from you any more. Ever. Shut up.

Posted by DEWEY FROM DETROIT at 8:25 PM