Give California to the Fidel Worshippers

Meet Dianne Watson, another shining example of public education’s efficacy. She’s a Democratic Representative from California, and that’s probably all you need to know, but for additional grist there’s this: 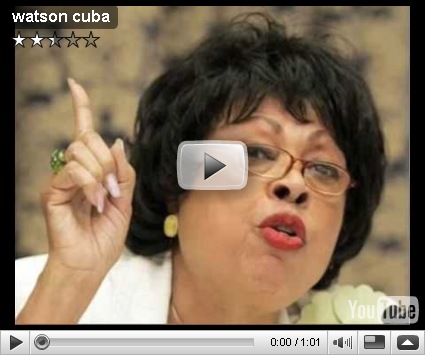 Just for the record, she can’t really be stupid because she has a PhD  in Education.

But she is a race baiter. One of the enlightened left that contends if you object to  the Obama Care nationalized healthcare solution you’re a racist. (What was our excuse when we opposed Hillary Care? We were sexists? Never mind, they don’t need any more ideas.)

By her own admission she hasn’t read the Health care bill yet, in any of its forms (can’t fault her there, no one else has either.) But she thinks it’s great.

And she thinks Fidel Castro was a hero who saved Cuba…from god-only-knows what. Here’s a little peek at the Cuba fashioned by “one of the brightest leaders I’ve ever met.”  She probably thinks Ahmadinejad is in Einstein’s league– well, except for the Jewish part.We’ve really got to raise public school standards.

Here’s a partial transcript from her Town Hall:

It concerns me that both she and Henry Waxman have that Nostril-Damus thing going on. Maybe she and Hank can just takeover their home state and make it the idyllic country of their dreams. They can call it Fidelafornia.