See? See How Important I Am?

While this will not win her high marks in Interpersonal Training class, this latest act by Sheila Jackson Lee is but one of her many moronic, narcissistic acts. 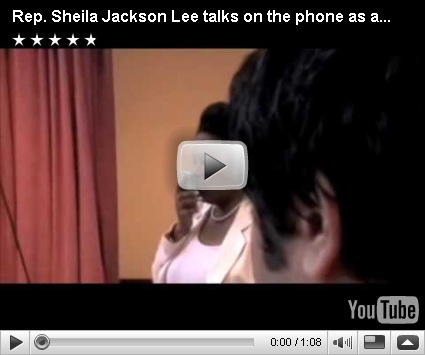 Among her other infamous moves:

In 2003, Lee complained that the names of hurricanes were too "lily white", and demanded that more 'black' names be used.

On a visit to NASA’s Jet Propulsion Laboratory, Lee, a member of the House Science Committee's space subcommittee, asked if the Mars Pathfinder had taken an image of the flag Neil Armstrong planted there in 1969. To which Michigan Rep Vern Ehlers quipped “we really don’t teach enough science in school these days”.

If this isn’t enough, go to YouTube; she has pages and pages of priceless material. And she’s just one of the many egomaniacal fools duly elected by equally brain dead constituents year after year. Let’s put a little more thought into who we send back to Washington in 2010.