What’s Wrong With This Picture?

Bill Clinton flies off to North Korea to seal the deal on the release of the two American “journalists” who wandered into North Korea, and BHO brings birthday cupcakes to the 89 year old cupcake Helen Thomas. 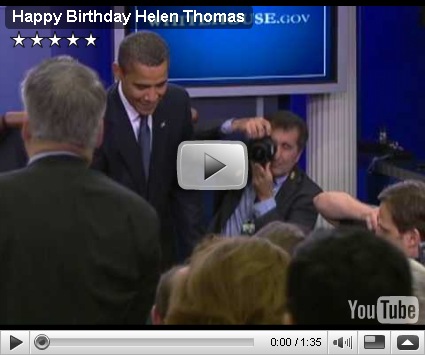 What’s wrong with this picture?

Could it be that Bill Clinton actually looked presidential as he walked off the plane, all somber and steady of foot? As opposed to the way Barry usually disembarks from a plane, playing the snare drums and looking for all the world like he’s on his way to a pep rally (which, to be fair, he often is.)

And here’s our current Prez, feting Ms. Thomas with Little Debbies, still looking like he’s at a pep rally (Again, he is. Check out the bouncing MSM bobble heads twitter when he comes through the door. Ohhhh! Mr. President!)

It was nice of him to remember the little old lady who shares his birthday (at least we think it’s his birthday). Because shoot, she is 89 and could get sick any day now. And being the good little trooper that she is, we know she would just volunteer to cash it in rather than burden our broken health care system.