Have a Cigar, and Shut Up

With apologies to Freud, sometimes a jokester is just a joke. So the genesis for the evil, racist poster of Obama as the Joker socialist wasn’t a rabid right winger. He’s actually Firas Alkhateeb,  a bored college student who found a tutorial on how to “Jokerize” photos on the internet and played around to create the Photoshop  version of a Time magazine cover.  He also posted on his website a picture of Napoleon riding a motorcycle.

Now, he’ll be the first to tell you that he’s not the one that took his original joke art and slapped the word “Socialist” across it. That was some still anonymous person in Los Angeles, but I think his comments might tell you where he comes down on the whole controversy: "It really doesn’t make any sense to me at all," Alkhateeb told the LA Times… First of all, who said being a socialist is evil?"

And see how easy and fun it is to make joker art? 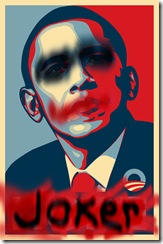