I Don’t Know Much About Art, But…

David Ng at the LA Times gave us a post-modern deconstructionist critique of the anonymously photo-shopped image of Obama the Joker-Socialist poster. His assessment: it could be anything. Or nothing at all. The guy must have gone to Berkeley.

Before reaching his non-conclusion we have to slog our way through this claptrap:

Methinks Mr. Ng has spent altogether too much time on an analyst’s couch. There’s  nothing deep, dark or mysterious about this poster. And it is fixed quite firmly in political context: Mr. Obama is a liar in socialist drag. The joke is on us. Come on, that’s funny.  Or it would’ve been had the artist been portraying George W. Bush, as Drew Friedman did last summer in Vanity Fair. (see image below)

And as for alluding to the possibility of the whiteface being racist; please. How can we ever take you people serious if you keep this up? 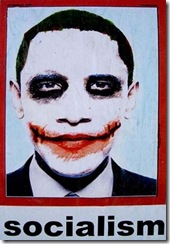 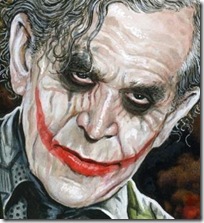 Anyway, there’s something to be said for turnabout being fair play. Vanity Fair’s readers seemed amused beyond containment at the art poster of GWB as Joker. So spare me your outrage over the joke-alist Obama. And  grow up.