Nostril-damus and the End of Days

The Democrats have found their own little prophet of doom in Henry Waxman, aka Nostrildamus. The world is coming to an end, and if we don’t pass his cap and trade bill, we’re all going to die. The science Hank relies on to reach this conclusion, if indeed he’s relied on science at all, makes the Medieval Nostradamus’s alchemy seem downright modern.

In a related turn in the “Apocalypse Now” scenario, it appears that dissent, which was very popular during the Bush administration, has fallen out of favor following the coronation of the “won”. Now dissenters, especially dissenters to the crap and tax legislation, are compared to holocaust deniers. (Excuse me, but wouldn’t that be BHO’s bud, Ahmadinejad?)

Nostrildamus asserts that opponents to cap and trade are rooting against the country; "And I think in this case they're even rooting against the world, because the world needs to get its act together to stop global warming,” Hank added. So now those of us who believe in real science as opposed to Al Gore’s mumbo-jumbo, are not just global warming “deniers;” now we’re worse than Hitler. 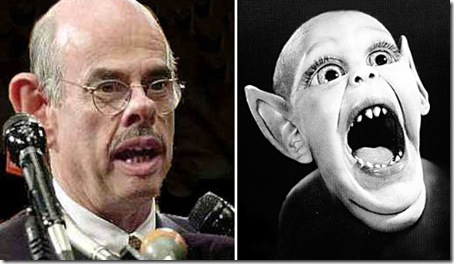 OR, TWO SIDES OF THE SAME COIN

Technorati Tags: cap and trade,nostradamus,global Warming
Posted by DEWEY FROM DETROIT at 3:21 PM