Milton Friedman would have been 99 today. While he still has a devout following, his name is far from a household word to most Americans and many in Congress.

Which is a shame, since he embraced and embodied the heart and soul of what originally created American Exceptionalism: the free market. 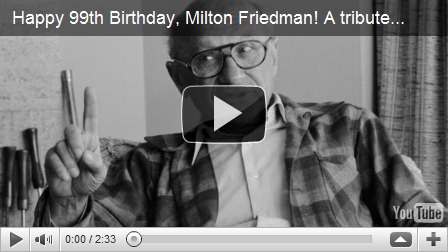 A Man Who Understood American Exceptionalism

Originally a Keynesian, he later became it’s principal (and principle) opponent. He accurately predicted that the Keynesian practices in effect in the 60’s would lead to the stagflation of the 70’s. You might have thought that alone would warrant giving his theories the inside track on establishing policies to resolve our current recession. But you would be wrong. We’re still wearing the Keynesian albatross of deficit spending around our neck.

All I know for sure is that our current Economist-in-Chief never met a deficit spending proposal he didn’t like and his Monetary guru, Ben Bernanke, never met a printing press he couldn’t love. It’s like mixing booze and ammunition.

Can a free market democracy work in a world run by willful idiots and populated by useful idiots? Doubt it. We need to either vote the willful idiots out or educate the useful ones. That’s a chicken or egg proposition, which usually means the bacon wins.

Posted by DEWEY FROM DETROIT at 9:01 AM