Do the Republicans in Congress have a death wish? I’m not going to reprise the last two “bites at the apple” because I don’t want my lunch on my computer screen. I already feel like I’m watching the pawn shop basement scene from Pulp Fiction with Obama playing the part of Zed, Harry Reid as Maynard, John Boehner as Marsellus and NOBODY cast in Bruce Willis’  hero role yet.  Although it appears that Michelle Bachmann, Eric the Cantor and Paul Ryan are auditioning.

Do any of the RINOs up on the Hill have the stones to cut up Obama’s credit cards and tell him to live within his means? Then, when he stops crying, present him with a plan to meet our critical obligations without raising the debt ceiling or taxes? Seriously, a little tough love might be appropriate at this juncture since praising, agreeing and cajoling hasn’t resulted in the desired behavior.

So what do you say boys and girls? Anyone willing to employ the time-honored and useful tough love technique?

Ok, The Donald checks in:

Yeah, yeah yeah I know, that means we won’t have enough money to fund the EPA, which is critical to Obama’s efforts to complete the collapse of our economy by bankrupting utilities and energy companies who provide energy from sources other than windmills, solar panels or hamsters on treadmills. We also won’t have enough to fund the Justice Department, Homeland Security and BATF;  so there goes our Pigford settlement, airport toddler groping program, and the very successful, “Gun Walker” initiative.

And I haven’t even scratched the surface of the critically important federal government offices, bureaus and departments “servicing” Americans every day that would be closed. I’ll assemble that list when my stomach settles down.

But I’m beginning to understand why the Republicans are unlikely to pull the  plug right away: 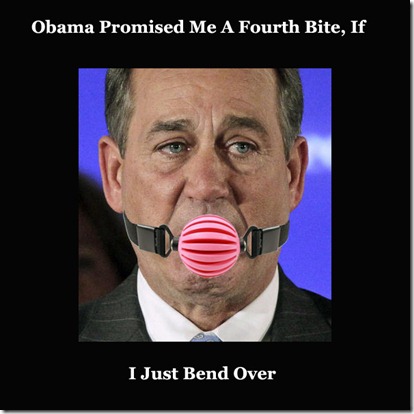 Meanwhile,  the infamous no-drama Obama apparently blew a gasket over Eric the Cantor’s audacity to interrupt him midway through his 20 minute answer to a 10 second question yesterday.

Seriously, what a dope.  No, not Cantor.  The other guy with audacity.

See “Call My Bluff, and the N-word gets it!”

Posted by DEWEY FROM DETROIT at 12:46 PM