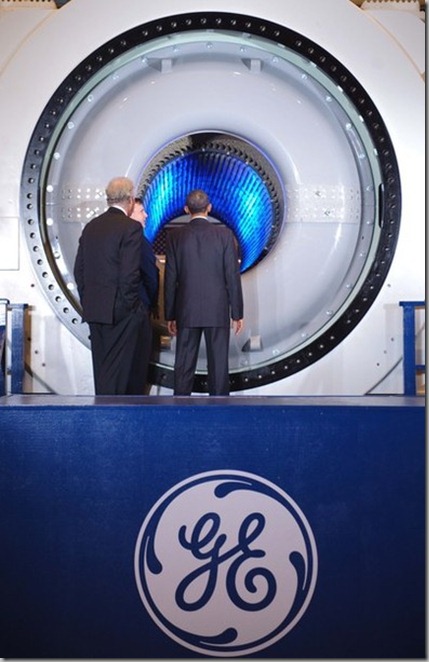 Immelt and the Won peer into the abyss that they’ve created. Together.

"The people who are part of the business sector, the people in this room, have got to stop complaining about government and get some action underway," he told the group. "There's no excuse today for lack of leadership. The truth is we all need to be part of the solution."

That certainly sounds like our acting President. It smacks of his signature style; a patronizing, derogatory pronunciation that combines equal parts ‘harpy’ and ‘preachy’ with trite. It’s the same tone your over-promoted, over-his-head boss uses when he realizes he’s lost the support of the troops; the tone that sets your jaw hard, causing your teeth to grind down on each other.

But no, it wasn’t Obama. It was Jeffrey Immelt. GE’s CEO. Jack Welch’s hand picked successor. I still don’t get that. What was he thinking?

This was Immelt carrying Obama’s water at a U. S. Chamber of Commerce jobs summit last week, following the release of another “disappointing” - and no doubt surprising (perpetually) - jobs report that showed growth had ground to a virtual stand still.

Why, you may ask, would the CEO and chair of President Obama’s Council on Jobs and Competitiveness tell the group of business representatives that it fell on them to fix things? I thought the economy was one area the government took full responsibility for – outside of election years of course. So, why would Jeff be telling business people that it’s their responsibility to take more risks and – get this – bring back jobs that had been moved overseas. Excuse me? This from the Chairman of G -“we bring good things to China”- E?

But hey, I get it: there just aren’t a lot of other silver arrows in the old quiver right now. And since Immelt was named chair of the COJ, he has brought a few token jobs back on-shore, in order to avoid being nailed with the hypocrite designation when he preaches to other companies. The PR department got out in front of that one.

Immelt also announced that his Council on Jobs has “made a number of recommendations for changes in government policies that should help job creation, such as the executive order announced Monday asking independent agencies to rid their books of old and outdated regulations. Wow! That’s insightful; worthy of an executive task force comprised of a slew of top corporate executives and bureaucrats. I’m amazed it only took them 6 months to come up with that recession buster.

Obama clearly picked the right “jobs czar”  to “task” with the responsibility of  finding solutions to America’s unemployment crisis.

“Get rid of outdated regulations?” He has got to be joking. That’s the kind of thing you come up with when the economy is humming along like clockwork and you just don’t want to mess it up. It’s not what you do when unemployment is 9.2% (19% actual), GDP growth languishing under 2%, oil prices broaching another all time high and the Volt is still spinning its coal-fired wheels in the ditch.

But this sage recommendation came as result of the Council on Jobs report that “Shovel-ready was not as … uh .. shovel-ready as we expected.” Let the record further reflect that the President, Immelt and the rest of the Council tittered hardily at this excellent little joke on the American taxpayer.

While he held the Chamber audience captive, Immelt took the opportunity to further shill for the administration by lecturing Chamber members on why it’s critical to raise the debt ceiling, immediately! And yes, you can put him down as being in favor of “shared responsibility” in order to reduce our deficit. He’s all in with the other 80% of Americans who want their taxes raised.

In case you’re wondering, there is no compensation for being “Jobs Czar. ” Not directly anyway. Immelt’s executive compensation at GE is determined in large part by how well GE’s bottom line does. The payoff for all of his heavy lifting around Washington will be reflected in stock options to be cashed in later. I’m betting he’s hoping to cash in much later, when the Republicans are once again in charge and stop talking about additional taxes on the fat cats who make “more money than they need.”

Because after all, and let me make this crystal clear: it’s not about the money. It’s about the amount you get to keep.

If you would like to review all the ways GE’s bottom line has benefited through its ties to the administration, go visit Sadhill’s post : “Bankrupt-Bailed Out-Government-Owned-Tax-Free-Overseas-Job-Outsourcing GE”  and check out the compendium at the end.

Who says you can’t buy love? 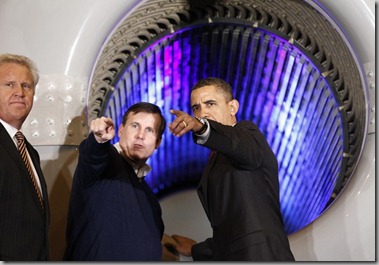 The way forward? You do a 180 and run like hell in the other direction. WTF, dude.

Linked By: Larwyn’s Linx on DougRoss@Journal, Thanks!

Posted by DEWEY FROM DETROIT at 2:42 PM