Houston, We’ve got a Problem

When your government lies to you, we might just have a problem. 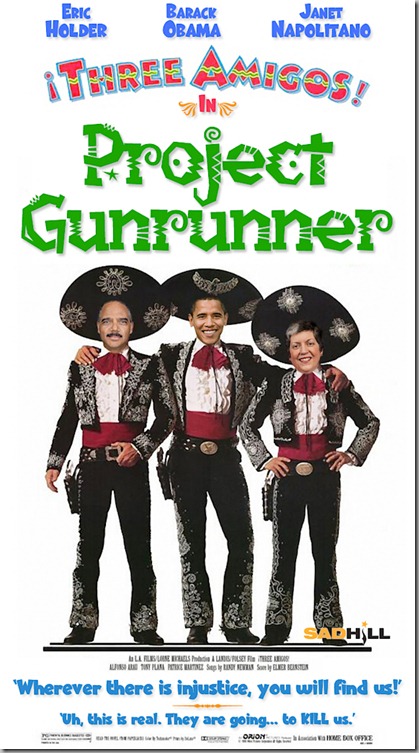 Begin with this, via SadHill , a highlighted screen capture of the DOJ website page: 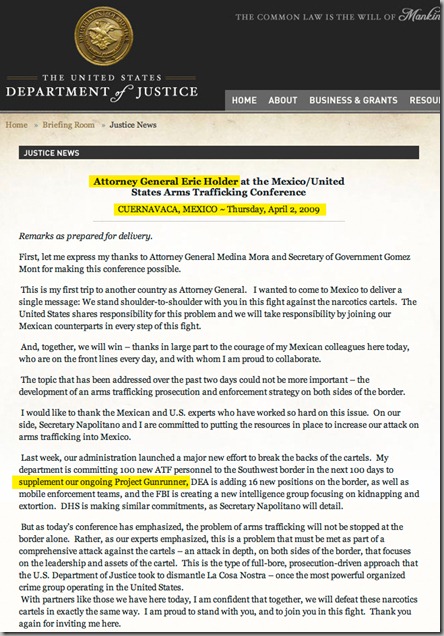 The long and short of it: Holder lied.

But Big Government found a 2009 speech by Holder on the Department of Justice's own website that proves the attorney general was well aware of Operation Gunrunner back in 2009:

The problem with Holder’s feigned ignorance is that he gave a speech in Cuernavaca, Mexico, on April 2, 2009, in which he boasted about Operation 'Gunrunner” and told Mexican authorities of everything he was doing to insure its success.

When questioned by the media, Holder also denied knowing anything about Gunrunner:

But at the arms trafficking conference in Cuernavaca, Holder not only acknowledged the program, he bragged that he was in the process of expanding it:

"Last week, our administration launched a major new effort to break the backs of the cartels. My department is committing 100 new ATF personnel to the Southwest border in the next 100 days to supplement our ongoing Project Gunrunner, DEA is adding 16 new positions on the border, as well as mobile enforcement teams, and the FBI is creating a new intelligence group focusing on kidnapping and extortion. DHS is making similar commitments, as Secretary Napolitano will detail."

While an argument could be made that there’s no way of knowing exactly how many of those 958 people were killed with guns supplied by the BATF-sponsored sales, only a fool fails to understand that it wasn’t the import of Hanna Montana albums that allowed cartel members to kill so many people. They used guns for the majority of those killings, and guns were readily available through “Operation Gun Runner.”

And what’s beyond dispute is the fact that U.S. Border Patrol Agent Brian Terry was gunned down in Mexico in December 2010 with a weapon purchased via “Gun Runner.”

And are we growing too cynical then, if we think that this was an attempt by the Obama administration to establish a reason and emotional support for banning more weapons? Of further impinging on the Second Amendment rights of citizens?  I think not.

It is important to remember that the Obama Administation and the Department of Homeland Security have implied that much of the violence in Mexico is to blame on law abiding gun shop owners who "sell to cartel members" and the Second Amendment, yet continued exposure of Operation Gun Runner shows the government approving the sales reported by shop owners to ATF, giving the green light for weapons to flow freely across the border into dangerous hands, resulting in thousands of innocent deaths in Mexico and  Border Patrol Agent Brian Terry in Arizona earlier this year. ATF sat by and watched as known criminals purchased the weapons they needed to carry out lethal operations with no take downs of cartels as a result, all while using law abiding gun shop owners as a cover.

And let’s not forget that President Obama himself wrote (ha!) an editorial calling for increased gun control. And Gun Walker was going so well, apparently ATF decided to open another branch in Tampa, walking weapons for MS13 – you remember them: just nice young men who happen to speak Spanish - to Honduras for the same sick, twisted reason as the Mexican Gun Walkers – whatever that might be.

So to summarize: once again, Houston, we’ve got a problem.

Oh, I forgot. We defunded them. Oh well, we can just hitch a ride with the Russians. Everything is working out just as we planned it then.

I suspect it may be gratuitous at this juncture to point out that the Second Amendment right to bear arms was carved out specifically – in addition to self defense – as a guard against tyranny. That would be tyranny not as it’s used by hyperbolic media-heads to denote anything they don’t agree with, but good old fashioned tyranny, by your government; of it’s people.

For a bunch of old dead white guys, our founding fathers sure seem to have been a prescient lot.

Posted by DEWEY FROM DETROIT at 5:47 PM