Vegetarians are cool. All I eat are vegetarians - except for the occasional mountain lion steak.
Ted Nugent

Born the Motor City Madman, Nugent has subsequently assumed the mantle of The Motor City Hit Man as well. This is vintage Terrible Ted:  schooling a PBS nerd on the finer points of the Second Amendment, recidivism and self-reliance.

If you’re convinced that Chris Christie isn’t going to run, and are still trolling around for your 2012 Republican candidate for President, here’s your man: 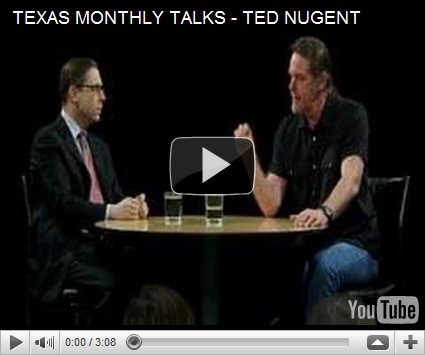 When Mr. Nugent is not advocating violence against evil criminals, here’s what he does for a living:

Here’s the Nuge’s data file. While his musical performances might lead you to think otherwise, his performance with Evan Smith in which he demonstrates critical thinking skills and logic is testament to a life-long avoidance of drugs and alcohol. I could do without the weird facial hair too, but he is a heavy metal artist.

Terrible Ted is 62 and has been touring every year since 1967. The 2008 video from the July 4 concert at the DTE Energy Music Theater (Pine Knob) was his 6,000th  concert. Get back to me, Nick Jonas, when you can match that.

PS: My lawyer would like me to mention that I’m not advocating unnecessary violence.

Posted by DEWEY FROM DETROIT at 4:52 PM