A Real Motown Review by MOTUS: Imposters to Follow UPDATED with “Rosalie” embed

Brought to you by a MOTUS-Dewey from Detroit collaboration. 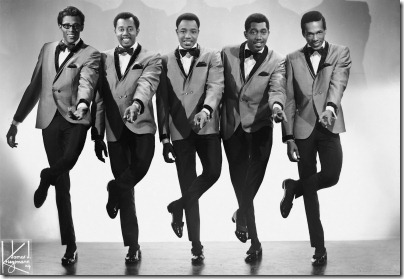 By now I’m sure you’ve heard that my Motown Review program lineup was vetoed in favor of one put together - with your money - by local PBS station WETA and certain Big White political operatives. Little Mo and I worked hard with Dewey from Dee-troit to select a set of artists and tunes that represent the best of the Motown tradition. When I saw the PBS lineup, I immediately suspected kickbacks and payola, like in the old days. Butt since that sort of thing is clearly forbidden by the Big White Ethics Rules and Regulations, I guess it’s just a coincidence that most of these performers coming tonight have new albums out, produced by studios that were so generous in their support of HOPE and CHANGE.

I think my program was probably a little too “Motown” and not enough “Downtown,”  if you know what I mean. So in place of my all-Motown review we’re going to be entertained by the likes of Sheryl Crow, John Legend, Seal, Jamie Foxx, Natasha Bedingfield, John Legend, Nick Jonas, Gloriana and Jordin Sparks performing a tribute to Motown. In lieu of real Motown artists. That should be fun too.

In fact, Smokey Robinson is the only authentic Motown performer coming - and I think he’s been assigned to sing backup for the cast from Glee. Better to be relevant than authentic. 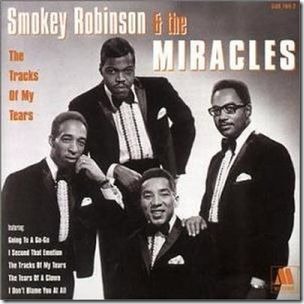 Since some of the original Motown icons have checked out permanently, I guess it’s OK to invite people who didn’t actually record for Motown to perform some of the old tunes. Butt most of these artists weren’t even born when Motown was founded. In fact, most of them weren’t even born before its demise. And Seal and Natasha? They’re Brits, for crying out loud! What could they possibly know about Motown? I’ve been told that Brits are soul-less.

And while this is a bit off topic, here’s a valuable tip, should you ever have to meet Sheryl Crow face to face: have a stash of Germinator-Wipes handy. Since she’s the leader of the “one sheet per visit” earth savers, I’m just thinking you’ll be glad to have them on hand. In case you’re forced to shake hands. 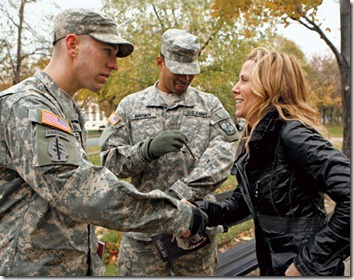 Sheryl, trying to sabotage our troops

Anyhoo, since you won’t get to see the Motown Review that  Dewey and I collaborated on either at the Big White tonight or on PBS later, I’m posting our song selections so you can at least listen to what real Motown sounded like, back in the day.  Butt before we get to that, Dewey has prepared a little primer on the history of music in Motown that he requested I post here for your information (think of it as PBS without the BS).

After reading it I think you’ll see how totally wrong tonight’s  Big White review is going to be. Nobody seems to know anything about Motown around here, which, while surprising, might explain that whole GM and Chrysler take-over mess.

And now from Dewey:

I get more than a little melancholy when I remember growing up with the Motown sound. It was a time when Detroit was the Motor City: one of the greatest, most prosperous cities in the world:  It’s cars and music shaped the dreams of generations. 50 years later we’ve got Eminem and the Chevy Volt.

Hittsville U.S.A was the place where the “Motown Sound”  was born, along with dozens of iconic Motown stars. A former photography studio, Hittsville was purchased by Barry Gordy in 1959 and it became the finishing school for Motown artists. They wrote, rehearsed and recorded their music right there, in Midtown Detroit, within the long shadow of GM world headquarters. Image, stage presence, dress, manners and choreography were carefully and meticulously controlled by Gordy himself. He was looking to develop a unique crossover genre of black artists with such broad based appeal that it would move seamlessly from the R&B market to the white pop market. Realizing the importance of image, packaging and marketing, he nailed it. Had his interests run towards politics, we might have had our first African American president decades ago.

For me, the true Motown ended in 1972 when Barry Gordy moved his historic label from it’s West Grand Boulevard home in Detroit to the land of fruits, nuts, and honeys: Los Angeles. 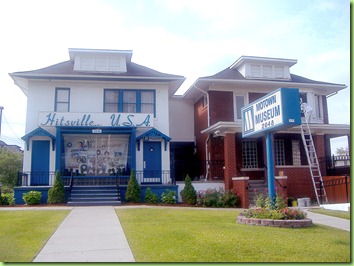 Anything Motown recorded after that is more accurately described as LA-town. Don’t get me wrong, they put out a lot of great music after the move, including Stevie Wonder’s album Innervisions and Lady M’s favorite pole-dancing soundtrack, the Commodores’ She’s A Brick House. It’s just that it was no longer the definitive Motown sound. Probably the world had moved on, and Gordy – as good at spotting trends as creating them - simply chose to move with it.

That probably explains too, why – when Barry Gordy moved out of Detroit -  he left behind the heart of the “Motown Sound,” the little known Funk Brothers. The “Motown Sound” was a musical style featuring a distinctive melody and chord structure, and a "call and response" singing style originating in gospel music. That “Sound” was created by Motown’s founders and producers/songwriters, Gordy and Smokey Robinson, along with its in-house band, The Funk Brothers, who performed the instrumentation on nearly every Motown hit between 1959 to 1971. 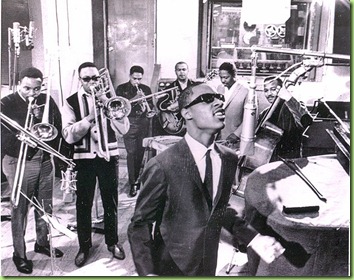 The Funk brothers belatedly received recognition in the excellent 2002 documentary Standing In The Shadows of Motown.  The documentary claims that the Funk Brothers have "played on more number-one hits than The Beatles, Elvis Presley, The Rolling Stones, and The Beach Boys combined." Not too shabby for a band no one has heard of outside Detroit.

I’ll wrap up my review of Motown, Hitsville U.S.A and Detroit musical history, and turn this back to MOTUS and Little Mo for the unveiling of the songs in MOTUS’ Motown Review in just a minute. But no discussion of Motown musical history would be complete without acknowledging the contribution of arguably the most important radio station of its time: AM 800, “The Big 8”, CKLW.

Ironically, the station most nostalgically associated with Detroit’s golden age of radio was actually Canadian. CKLW was a 50,000 watt radio powerhouse sitting on the Canadian side of the Detroit River, due south of downtown Motown. 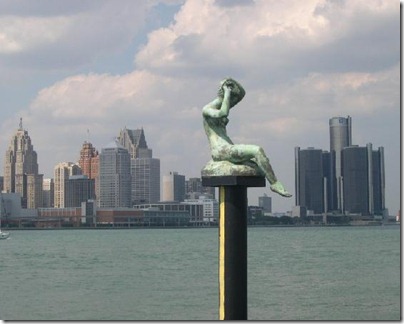 Growing up in Detroit or anywhere within the “Big 8’s” signal range was a musical experience permanently embedded. CKLW’s night pattern signal was so strong that it could be heard in 23 states and 4 Canadian Provinces. At it’s peak  popularity  in the early 70’s, CKLW was the number 1 station in the Detroit market - the 3rd largest radio market in the US at the time - and the 4th most listened to station in North America.

And no one played a bigger role in CKLW’s success than the little known Rosalie Trombley. 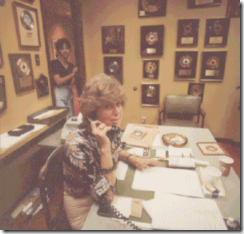 Rosalie started with The Big 8 as a switchboard operator/receptionist, but she had such an uncanny ability to spot talent and predict future hits from the demos submitted to the station that she landed the Music Director job in 1968, a position she held until the station switched to a talk format in 1984.

Countless recording stars owe their success in no small measure to Rosalie’s instincts and her placement of their recordings in the CKLW power rotation. Detroit native Bob Seeger was so grateful to her for putting him on the map that he immortalized her in his 1972 hit “Rosalie”  (don’t skip this!) 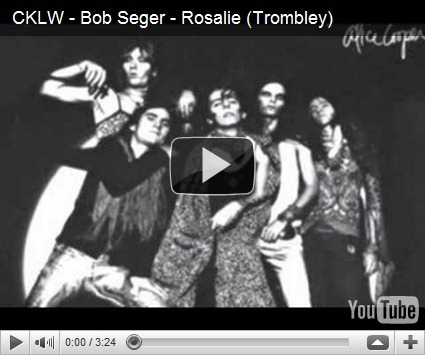 in which he sings, "She's got the tower, She's got the power / Rosalie, Rosalie Trombley." Rosalie never permitted the song to be played on CKLW – giving credence to the rumor that Rosalie was the last program director with integrity and couldn’t be bought.

The Big 8’s demise began with the Canadian Radio and Television Commission’s (CRTC) creation of rules to protect “Canadian Culture”  through Canadian Content regulations. The CRTC told CKLW’s American owner RKO that it must sell all but a 20% of the station to a Canadian entity. RKO choose to sell 100% of it’s stake. Soon after, the CRTC imposed rules requiring that a minimum of 30% of its daytime (6 AM to midnight) programming must be Canadian content. But, that’s another story, and a sad one at that. Suffice it to say that the great CKLW took a nosedive and never came back up for air. Another victim of government meddling.

CKLW’s contributions in terms of formatting and artist discoveries are too numerous to discuss here, although perhaps it would make for an interesting future post. In the meantime, if you’re lucky enough to remember the “Big 8,”  or just want to learn more about CKLW,  there is a terrific DVD available, Radio Revolution: The Rise and Fall of The Big 8 .

Well, my time is up - back to you MOTUS.

Thanks Dewey, butt since you used so much of my allotted line space, I’ll just introduce my Motown Review playlist without further ado. Click on any song to listen and think fondly of a time when America was still strong and Detroit still had soul.

The review wraps up with Aretha who, while never recorded on the Motown label, is definitively Motown.

Reach Out. I’ll Be There: Four Tops

If I Were Your Woman: Gladys Knight & The Pips

What Becomes of the Broken Hearted: Jimmy Ruffin

What Does It take: Jr. Walker & The All Stars

Dancing In the Streets: Martha Reeves & The Vandellas

Don’t Mess With Bill: The Marvelettes

How Sweet It is to Be In Love With You: Marvin Gaye

You’re All I Need To Get By: Marvin Gaye & Tammi Terrell

I Heard It Through The Grapevine: Marvin Gaye

The Tracks of My Tears: Smokey Robinson & The Miracles

For Once In My Life: Stevie Wonder

It’s A Shame: The Spinners

Stop! In The Name Of Love: The Supremes

My Girl: The Temptations

Just My Imagination: The Temptations

The Way You Do The Things You Do: The Temptations

Until You Come Back to Me: Aretha Franklin

Posted by DEWEY FROM DETROIT at 10:30 AM