The proprietress of Patum and Peperium, an advertising agency émigré and Detroit expat has some comments on the Chrysler Super Bowl Ad. I’m paraphrasing, but I believe she said that the ad’s allusion and artifice were quite lovely, but vacuous. And I believe that reminded her of another thing… as her post was titled “Video proof Jimmy Carter's second term will be worse than his first.” 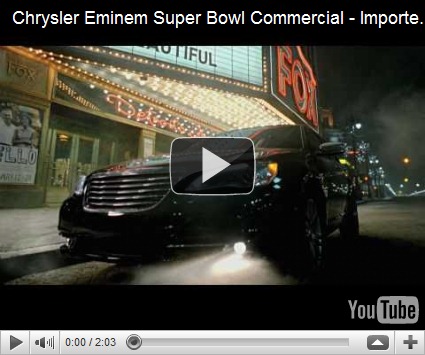 I ventured a guess that the ad team was wasting their time doing product commercials when they so clearly could enjoy a much more robust career developing political ads. Mad Men of Madison Avenue may have invented hype and hyperbole, but politicians have taken the art form to new lows.

But back to Mrs P’s post: she reminds us that Jimmy Carter was president when Congress authorized the first Chrysler bailout in 1979, to the tune of $1.5 billion (approximately $4.5 million in 2009 dollars). That note was paid in full and the car manufacturer returned to profitability in 3 years under Lee Iacocca's leadership.

Obama authorized a $15 billion bailout, for which current  Chrysler CEO Marchionne now complains his company is "paying shyster rates."  Classy, especially since he is looking to renegotiate the terms of his deal with the devil federal government. All of which led some to speculate that the Super Bowl ad was aimed at politicians in charge of the purse strings, more so than consumers ("Taxpayers' money saved a car company from bankruptcy and all they got was this lousy Super Bowl commercial.")

I’m sure that Obama is torqued off about Marchionne’s whining, as he thinks he should be thanking him.

As part of the Chrysler deal (as well as the GM deal), long established bankruptcy and contract law principles were thrown out the window when the government seized the assets of bond holders and illegally turned them over to the UAW. (Read Michael Barone’s report, but only if your blood pressure is controlled by medication. I quoted from it back in May of ‘09 too, in the Sopranos of Pennsylvania Avenue.).

Chrysler remains the weak sister among the surviving American auto companies. The 2 minute Super Bowl ad did nothing to dispel the sense of it’s imminent demise.  Mrs. P concludes – in addition to the fact that the ad is ineffective - that even Jimmy Carter did a better job bailing out a car company than the Won. Ouch! We’re in ugly-ville now.

Read the complete post  - if for no other reason than the pleasure of watching Lee Iacocca's truly iconic American car company ads. From back in the days when straight talk was more than a footnote in a failed presidential campaign.

Posted by DEWEY FROM DETROIT at 6:09 PM