The Rational Jingo ponders why anyone is surprised to discover that Obama is simply a turtle on a post: 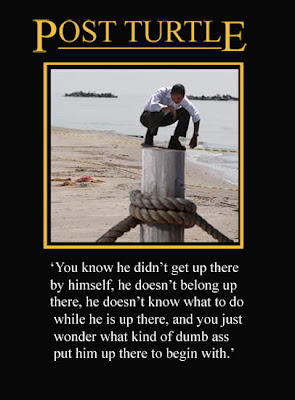 Obama is a media created myth who is more than likely a puppet for far more sinister forces. Problem is, those sinister forces have a belief system rooted in Marxism also… It's easy to destroy things. Much harder to govern and develop functioning systems that keep the people out of the streets with burning pitchforks…

She points out the inconvenient truth about the Left’s sustainability – or more to the point lack thereof:

Most importantly for leftism to exist, even in it's more democratic forms, anywhere in the world, it needs, at least one engine of productivity to cling it's parasitical claws into. We were that engine.

And under current ‘leadership’ we are in the process of shutting that engine down.

…The left only operates from a position of strength from the sidelines and armchair quarterbacking. Ginning up class envy and creating divisions is what they do best. Those are skills that are safely practiced from a position of non-leadership and taking on the status quo. That is why leftism, historically, is a revolutionary movement.

As they say, read the whole thing.

Posted by DEWEY FROM DETROIT at 4:25 PM