It’s come to this: now the White House is blaming Obama’s failure to talk to BP’s CEO Tony Hayward on… “corporate structure.”

Gibbs said Obama hasn’t called CEO Tony Hayward because — according to what Gibbs called the “executive structure of corporate governance” — the CEO alone isn’t the final word on company decisions, which are made by the board of directors.

So did that mean that Obama had picked up the phone to talk to some of these powerful board members?

Sometimes lack of experience really does matter. This  White House clown posse is so unfamiliar with “corporate structure” they can’t even use it in a sentence. Or craft a plausible lie.

Unlike community organizing work, running the (currently) free world would probably benefit from something other than on-the-job-training. For starters, since the President is now so hot to kick ass, a little “corporate structure” experience might have taught him where to go to find the one arse he should be putting his foot to. Then common sense would have kicked in to tell him that the best way to bring this to fruition might be to actually MEET WITH THE CEO OF BRITISH PETROLEUM! Good grief.

Kind of makes you wonder about the “wisdom” of the AIG bailout doesn’t it? And eventually someone is bound to ask just how smart it was to let Obama buy GM and Chrysler as a  Christmas present for the UAW.

On the other hand, since GM is now focusing on really important things, like killing the use of the nickname “Chevy,” maybe things will work out after all. 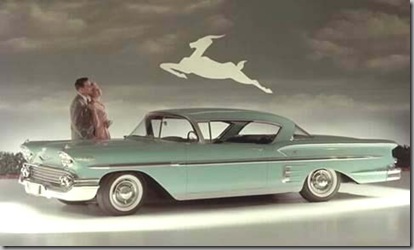 With H/T to vereteno, Michelle’s Mirror resident ex-Soviet and MOL :

“We are on correct path comrades!”

Posted by DEWEY FROM DETROIT at 7:48 AM