I think everybody is missing the point on the feel good story of the week: The longest recession since the end of WWII officially ended in June - of 2009!

Yeah, I know. Too many exclamation points. Especially since everyone still feels like we’re in the middle of a very deep hole, the jobless rate hovers at 9.6%  headed for at least 10%, you can’t give a house away in most markets, and still foreclosures continue to pile up. You know what they say: if it looks like a duck… etc.

But here’s what everyone’s missing. If we’re still mired in deep economic woe, that can only mean one thing - the Obama fabu-losity, which gave us the trillion dollar stimu-losity,  well, didn’t. Stimulate us, that is.

So I’d like to personally welcome you all to the shiny new thing: the official Obama recession. The torch has been passed, and man, it sucks when even the Canucks are kicking your butt. 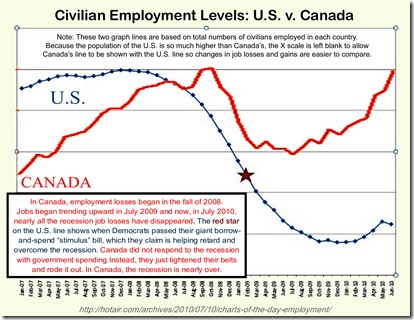 The “we’re headed in the right direction”  summer of recovery is now officially over. Handing it back to you now, Barry,  for the fall mid-term results.

Posted by DEWEY FROM DETROIT at 5:52 PM