From the Classroom to the Oval Office: Educated, Arrogant and Ignorant

Hmmmm. Is it possible that the world is catching on to the scam of higher education? There are  some people who think so. Notably, Glenn Reynolds, the Instapundit, who’s been banging the drum about an “education bubble” for awhile now.  Roger Kimball recently picked up the ball and advanced it 10 yards in Back to School?  There’s much data to support the forecast - first put forth by Reynolds - that we are fast approaching the bursting point of this bubble.

But the TaxProf Blog has summarized  arguments favoring a bust rather succinctly in this graph: 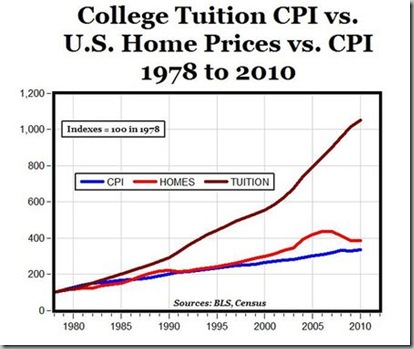 He notes that home prices increased by 4 times between 1978-2006, which looks like child’s play compared to the increase in college tuition – which went up by a factor of 10. The housing bubble caused a lot of people to be upside down on their mortgages: owing more than their house is worth.  The education bubble puts a lot of graduates in essentially the same position. The debt they incurred to get a college degree is now more than the incremental increase in earnings potential they might reasonably expect. In other words, many of them could have gotten a job paying just as much without ever having entered a 4 year institution of higher learning. The fact is, depending on the degree they “bought,”  their return on investment for a college education has dropped to something like zero. Big debt,  little equity. Not good. Even today’s math-challenged graduates should be able to understand that.

Glenn Reynolds has chronicled the roots of this bubble, including “cheap” credit made readily available to students and unchecked increases in administrative and faculty salaries. Combined with an education curriculum that does not, as Mr. Reynolds might say, foster economic value, this results in a very overvalued product. Busts invariably follow this set of circumstances.  His infamous example of the lack of economic “value” is a Bachelor's degree in Gender Studies.  I confess, I can think of no real use for such a degree other than  “victim-class shakedown artist, female/gay/lesbian/transgendered division.”  I’m betting, though, that due to the  entrenched recession, even previously sympathetic audiences for this sort of thing have lost much of their appetite for this non-productive subset of race-hustling.  (Although there is one caveat: corporations, having already been shook down by every conceivable victim group, may still be hiring such people in their Diversity office, or whatever they’re calling it now.)

So, why, I wondered, are there so many students/parents paying for degrees in  “disciplines” that have no plausible reason for existence, let alone  job-market demand? How is it that liberal arts transmogrified from English, History and Political Science to Communications, American Studies and Women’s/Gender/ Black Studies? Who could have imagined that navel gazing – already a refined collegial art form 40 years ago  - could have become even more self-involved through specialization?

As with all worthy questions, all you need to do is wonder, and someone will have already answered your question. Case in point: it turns out that Victor Davis Hanson has just recently addressed this very issue.

Mr.  Hanson, a tenured professor in the California State University system for many years, now a  full time farmer, writer and member of the Hoover Institute, explains one of the reasons degrees may not be as relevant as they once were. In a word, professors.

In his article,  We Are Ruled by Professors,  Mr. Davis answers my question by describing  just who it is we are paying to educate young  minds today. In doing so, he inadvertently explains how it is we’ve arrived at the upside down value-added equation that is the cost of  a college education, i.e., the gurus of academia are not really adding much value because they don’t have much value to add.

Here are some of Victor Davis Hanson’s observations on his former brethren (is that an acceptable term in Genders Study?).

He begins by laying out a few of the basic precepts of academia:

First was the false knowledge — odd for an institution devoted to free inquiry. The university runs like a 13th-century church in which the heliocentric maverick is a mortal sinner. So too on campus the Rosenbergs never spied. Alger Hiss was a martyr. Mao killed only a few who needed killing (see Anita Dunn on that one)…

Che was not a murderous thug, but a hair-in-the-wind carefree motorcyclist...  Anyone with an accented name obviously had picked grapes or was denied voting rights. Adlai Stevenson was an American saint... [and]… Only the unhinged even discussed doubts about global warming. Don’t question any of the above; it was all gospel — as we see now in D.C., from Keynes to Gorism to Cordoba as the beacon of Islamic tolerance during the Inquisition.

Then he explains a bit about their cross-discipline skills, and keen ability to maintain a realistic perspective on their contributions to the planet:

...We heard for two years the Homeric battle of how the sociology prof, Odysseus like (or perhaps more in the Achilles strain), once somehow jump-started his car in the parking lot…

We heard a lot that everyone was “tired” and “exhausted,” as if we had been painting all day or digging trenches for an irrigation company.

From there he moves seamlessly into professors’ child-like awe of the real world:

The World of Arugula

So there was the cluelessness about the material world, and both a repulsion and fascination for it.

He also reveals that academics possess a bit of a green streak, and I’m not talking “sustainable housing” here:

Looking back at it all, envy seemed the university lifeblood. Most other professionals, you see, were, in comparison to us, overpaid —especially those whom we had the misfortune of sometimes coming in contact with, or, worse, even socializing among. Go to campus and the present demonization of Vegas, Wall Street, surgeons, and insurers makes perfect sense...

Money both repelled and yet attracted academics, those strange summer moths that hated the cash bulb and yet could not resist its radiance. MDs, MBAs, JDs — all these folks had studied far less than we had! And yet, most unfairly, they now made far more money! We, of course, to paraphrase Barack Obama, out of altruism had passed on all those easy avenues of getting rich (identifying a Latin gerundive or an underappreciated 19th suffragette being far more difficult than cracking open someone’s brain or building a shopping center). (By the way, did you ever really believe Barack or Michelle that they could have waltzed over to Wall Street and struck it rich — as if such merchandising and monetizing were no more demanding than community organizing?)…

And he offers insight into the undeniable value of, and mechanisms involved in tenure:

I can only remember two tenured professors who were fired, one a child molester who was “retired,” and the other a decapitator who was imprisoned (see below). I remember in a tenure appeal, the aggrieved professor of theater arts wrote a furious (and successful) letter to our committee that began, “Witch charges about me…”

I could go on, but you get the picture about the strange habits that arise when you ensure someone lifelong employment, institutionalize unaccountability and groupspeak, and create artificial hierarchies of respect that are not necessarily earned by either teaching excellence, scholarship, or value to the community. After the pension meltdown, a great reckoning is coming to academia and it won’t be pretty.

Oh, oh! That sounds like another pin prick in the bubble.

He even riffs on the profs’ sartorial tastes:

... Most of the professors’ clothes — huge treaded hiking boots, sub-arctic parkas, multi-pocketed Safari dungarees — were designed for the earth’s uninhabitable regions. You see, it was the idea of struggle (cf. Michelle’s garden) that mattered — the philosophy professor at any minute forced to wade across the Amazon on his way to the lounge, sort of like the huge Land Rovers in the faculty lot that could in theory go anywhere, and in fact went nowhere but 2 miles home. (Gas-guzzling Yukons were bad; gas-guzzling Land Cruisers weirdly OK.)

They’re poseurs, get it? That’s what he’s trying to tell us. Pretentious  elite snobs who look down their noses at those who don’t share there educational credentials, world view and  rarefied sensibilities. And the reason Victor Davis Hanson brings this up at all – well, I’ll let him explain:

So why again the above rant about academics?

We are presently governed by academics. In an era in which university people proliferate in this administration and seem to make things far worse for the rest of us, we need to be reminded why we should not look to the university for answers. What I hear coming out of Washington reminds me a lot of what I once heard coming out of the philosophy or English department. And that is a scary thing indeed.

PS. Perhaps this course offering can  further explain the state of liberal arts education: Zombies 101. In the infamous words of the I-Man, you can’t make this stuff up.

Posted by DEWEY FROM DETROIT at 6:38 PM