Is there not one lawyer in the Messiah’s administration that recognizes the Constitution’s relevance to the law?

Chrysler’s senior debt holders, aka “greedy hedge funds” have filed suit against the Administration in its heavy-handed resolution of the Chrysler reorganization. Their claim seems fairly straight forward: it’s unconstitutional to arbitrarily break a contract with pre- TARP senior creditors in order to give the proceeds to junior creditors – in this case the UAW. Worse, BHO took to the pulpit when the bankruptcy filing was announced to trash the bond holders:

"In particular, a group of investment firms and hedge funds decided to hold out for the prospect of an unjustified taxpayer-funded bailout. They were hoping that everybody else would make sacrifices, and they would have to make none. Some demanded twice the return that other lenders were getting. I don't stand with them."

These “investment firms and hedge funds” have fiduciary responsibility to their investors: pension plans, retirees, etc. to fight for their rights. They offered to settle for 50% (remember, they are the Senior debt holders – that means they get paid first -  that’s what the bond contract they bought states) but the administration demanded 20%. That would ensure enough of the dead carcass was left to sate the UAW’s appetite .

In his statement last Friday, BHO continued to explain how the corporate assets would be split up, with a 55% controlling interest going to the UAW. Now, I’m not a Constitutional scholar, and I know that’s not the president’s call.  It falls within the purview of the bankruptcy judge. But since the administration threatened another hedge fund (Perella Weinberg, who eventually caved in) with being trashed by the White House press core (welcome to useful idiot status, press guys and dolls), there’s no reason to believe they’d have any qualms about fixing the judge in a bankruptcy case. What? Oh. I guess that only happens in movies. And besides, the White House denied it threatened to trash P-W (shortly after BHO trashed the remaining hedge funds).

So there you have it: BHO, who has demonstrated a disdain for the Judicial system in general, and the Constitution in particular will be selecting the next Supreme Court Justice. And he thinks it important that the next justice be empathetic, that he or she understand how court decisions impact everyday people. Again, I’m no constitutional scholar, but I understand the concept behind the blindfolded lady to mean that the law is the law is the law, despite an individual’s status in life. There’s no empathy in constitutional law.

If you want to listen to WJR Detroit’s Frank Beckmann interview Tom Lauria, representing the Chrysler bondholders, regarding the legal issues: 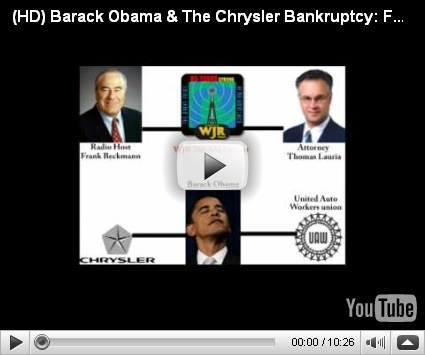