“What Doesn’t the President Know, and When Didn’t he Know it?” 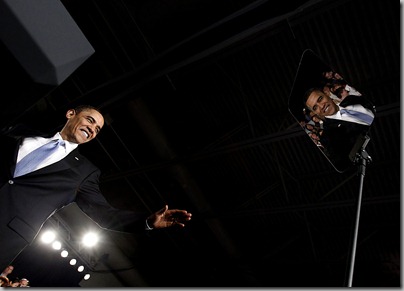 The image of the image that thought he was Obama

Spengler  contends that there’s not much in the WikiLeaks that you couldn’t have noodled out on your own by snooping around the internet. Never-the-less, he lays it out in a fashion that will chill you to the bone.

Napoleon was a lunatic who thought he was Napoleon, and the joke applies to the 44th United States president with a vengeance. What doesn't the president know, and when didn't he know it? American foreign policy turned delusional when Barack Obama took office, and the latest batch of leaks suggest that the main source of the delusion is sitting in the Oval Office.

The initial reports suggest that the US State Department has massive evidence that Obama's approach - "engaging" Iran and coddling Pakistan - has failed catastrophically. The crisis in diplomatic relations heralded by the press headlines is not so much a diplomatic problem - America's friends and allies in Western and Central Asia have been shouting themselves hoarse for two years - but a crisis of American credibility.

Not one Muslim government official so much as mentioned the issues that have occupied the bulk of Washington's attention during the past year, for example, Israeli settlements… while a solution to the Arab/Israeli conflict would be a great achievement, Iran would find other ways to cause trouble.

But the pre-ordained winner of the Noble Peace Prize will hear none of it. He’s too busy building a new world order in his image and likeness:

How do we explain the gaping chasm between Obama's public stance and the facts reported by the diplomatic corps? The cables do not betray American secrets so much as American obliviousness. The simplest and most probable explanation is that the president is a man obsessed by his own vision of a multipolar world, in which America will shrink its standing to that of one power among many, and thus remove the provocation on which Obama blames the misbehavior of the Iranians, Pakistanis, the pro-terrorist wing of the Saudi royal family, and other enemies of the United States.

Unfortunately we live in dangerous times, where naiveté carries a steep price,  and failure to control escalating hostilities has grave consequences:

…Iran has had two years to enrich uranium, consolidate its grip on Syria, insert itself into Afghanistan, stockpile missiles with Hezbollah in Lebanon and Hamas in Gaza, and build up its terror capabilities around the world. The window is closing in which Iran may be contained. Covert operations and cyber-sabotage might have bought some time, but benign neglect of Iran has reach its best-used-by-date.

Yet Obama is convinced he can end nuclear proliferation through his stupid START tready, and ultimately rid the world of nuclear weapons. After all, he wrote an opinion on a nuclear free world while still in undergraduate school, and hasn’t changed his mind since. Not everyone reaches the pinnacle of their intellectual development while still and undergraduate like Obama did. The fact that he still believes what he wrote then is  considered an indication of his brilliance and a mark of his consistency. Yet he feels free to chastise middle-Americans for clinging to guns and religion. Because that’s stupid, misguided, dogmatic and inflexible. Totally different from clinging to the naive ideology that he was raised with. Marxism is enlightened. A nuclear free world (aka “Putting Pandora back in her box”) just requires the leadership of a visionary leader.

Unfortunately the Free World continues to be headed up by a President who is so clueless that he plays golf and basketball in the midst of domestic crises, and calls a press conference to report a fake federal government pay freeze workers when all hell is breaking loose on the international scene. He seems forever out of step with reality.

The cables, in sum, reveal an American administration that refuses to look at the facts on the ground, even when friendly governments rub the noses of American diplomats into them. Obama is beyond reality; he has become the lunatic who thinks that he is Barack Obama.

The lunatic is in the hall.
The lunatics are in my hall.
The paper holds their folded faces to the floor
And every day the paper boy brings more.

And if the dam breaks open many years too soon
And if there is no room upon the hill
And if your head explodes with dark forebodings too
I'll see you on the dark side of the moon.

And if the cloud bursts, thunder in your ear
You shout and no one seems to hear.
And if the band you're in starts playing different tunes
I'll see you on the dark side of the moon.
"I can't think of anything to say except...
I think it's marvelous! HaHaHa!"

Posted by DEWEY FROM DETROIT at 12:57 PM