My Work Here is Done

This is from Doug Powers at that other Michelle’s site, discussing the thousands of empty seats in the Cleveland auditorium where Barry and Joey spoke yesterday as they wrapped up the campaign tour-de-force. He notes the tangible “enthusiasm gap” in the All-Obama-All-The-Time party:

And that 8,000 “crowd estimate” comes from the DNC, so you know it includes area meter maids, janitorial staff and cockroaches.

The New York Times noticed the enthusiasm gap as well, but relayed the DNC spin:

Organizers noted the president was competing on a Sunday afternoon with church, football and Halloween.

Remember when you could pretty much experience all three at an Obama rally? Times have changed.

I think Vanderleun has accurately captured the essence of the moment: 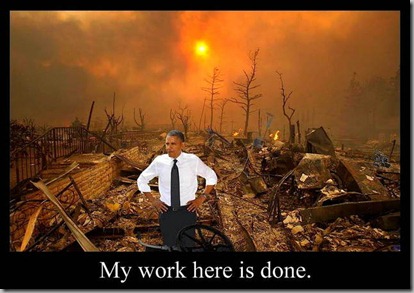 Oh yes, there will be dead-Dems-walking come Wednesday morning.

Posted by DEWEY FROM DETROIT at 9:28 AM