Is there anyone left who still believes Paul Krugman has either a brain or a soul? Aside from the New York Times Editorial staff?

Here he is recommending increasing taxes and matter-of-factly instituting death panels (hmmm – who was it that first mentioned the existence of “death panels” associated with Obamacare? And was ridiculed by the legacy media as an idiot? Oh yes - that was Sarah Palin. Well, apparently Paul Krugman agreed with her all along.)

Beginning around 4:13, and again at 6:25 you can hear Pauly in his own economist-words- of-wisdom proclaim that the real solution (the “final solution?”) will come down the road a bit in the form of “death panels and sales taxes.”

This man is just an effing economic genius. Let’s vote for him! All he’s missing on his resume is a stint as community organizer. 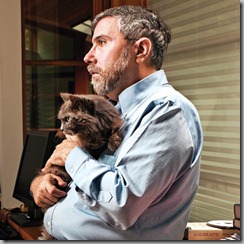 Aside from the hair (his and his cat’s) they bare a striking resemblance to Dr. Evil and Mr. Bigglesworth 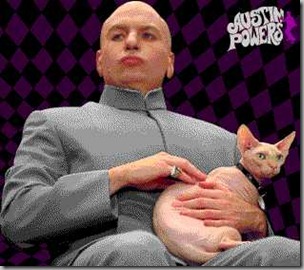 Posted by DEWEY FROM DETROIT at 10:07 AM