Know Thy Enemy I: the Education System

Barack Obama did not bring us to this first circle of hell on his own. He was aided and abetted by 1) an education system with a relentless propaganda agenda, 2) a media oligopoly that has completely abrogated its First Amendment responsibility and 3) a celebrity dominated culture that is largely a product of the first two.

We begin today with a look at:

I. The Education System

In a previous post I covered how the public education system fell under the thrall of postmodernism – simply a new name for all the old socialist/communist/relativist claptrap. Some of the key points:

Key in this alliance is a shared, deep-seated disdain for the philosophical roots of Western thought, specifically the individualism inherent in its tenants.

Since both camps were heavily populated with elite intelligentsia, they were well-positioned to pursue their objectives through the education system. Subjectivity, relativity, and pragmatism became keystones of a new "education philosophy."

That new “education philosophy” is now known as “social justice.”

Postmodernism's education cartel has dictated the terms and conditions of education for decades. They own the education departments in major universities, where the curriculum is likely to include the twelve-volume set Teaching for Social Justice edited by William Ayers.

Yes, that William Ayers; the anti-American, anti-capitalist, unrepentant terrorist Bill Ayers who shares the belief with Hugo Chavez that “education is the motor-force of revolution.”

The portal between education departments and your child's classroom provides a conduit for an endless stream of postmodernism's collectivist garbage. Think not? How else to explain the likes of  textbooks like Rethinking Math: Teaching Social Justice by the Numbers?

There is no other explanation.

Running under cover of academic freedom and educational "philosophy," postmodernists have managed to do what other strains of totalitarianism only dreamed of: insinuate their beliefs into every aspect and level of education.

“Insinuation” of that nature is also known as propaganda.

In my old Agitprop series on the government-education complex I explained how academic subjects in K-12 have been dumbed down over the decades. It’s not a coincidence that the reading, math and science scores of America’s children have fallen behind those of 24 other countries. Think about that: we’re no longer number 1, we’re number 24!

Dumbing down the curriculum erodes the need for students to learn critical thinking skills. Less challenging course work was introduced to preserve students’ self-esteem (teaching to the lowest common denominator – for those of you lucky enough to even know what a denominator is) in the misguided belief that somehow self-esteem could stand in for actual achievement.

Political correctness was applied to textbooks which were then “purged” of anything that could conceivably be considered offensive. In addition to being used as an excuse to exclude that of which we disapprove, political correctness was used to accommodate the inclusion of that of which we do approve as well, such as Johnny Has Two Mommies. By the time you’ve cleaned everything up like that, there’s not much for kids to do other than just sit there and absorb.

But it’s the second part of the new academics, the social justice agenda, that is the most insidious. If anyone can persuade me that “social justice” has a valid place in the teaching of math, geography and science I’ll reconsider my position. Until then I will continue to believe that subverting education with the rhetoric and philosophy of “social justice” - in addition to being un-American as it teaches that subjugating the individual will for the benefit of the masses is a superior value – is the ultimate step in the dumbing down of America.

Children are now being indoctrinated from kindergarten through post-doctoral programs. Not in every school of course, but in the vast majority of institutions of learning all manner of subjects being taught are presented against a social justice program running in the background. Whatever the subject of human interaction being taught – business, history, psychology, education, recycling – it is being played against the grinding wheel of America as an oppressive society. Children learn at every educational turn that America, along with the rest of the Western world, is systemically racist, sexist and classist. And as such, America institutionally discriminates against women, non-whites, working Americans and the poor.

So what are children supposed to do? They certainly aren’t going to want to go to work for a company that perpetuates that sort of thing. Maybe they can follow Michelle Obama’s advice and steer clear of corporate America. In fact, why not just voluntarily “surrender” that law license (that they took $200,000 in student loans out to get)like she did and take a job with the government; or a non-profit. Because after all, “at a certain point you’ve made enough money.”

We should be more than a little suspicious of an education system that presents children with bromides for all of life’s rather complex issues. When all of the possible answers have been neatly laid out for you and all you have to do is choose between the black one (bad) and the white one (good) it does make decisions a lot easier. Although we really need to work on that designation of “black” to designate bad choices. It seems rather racist; but what can you expect from a culture that has oppressed peoples of color from the day the Pilgrims first landed on the shores?

Pre-conditioned responses (aka “Pavlovian”) to predictable questions and problems takes a lot of the tediousness out of thinking. And applying them in your daily life does alleviate much of the need for analytical skills which allow you to visualize, articulate, and solve both simple and complex problems on your own. And that’s a good thing, since the new American social justice education system is apparently doing very poorly at teaching all of those skills.

People who still know how to apply statistics might have fun looking at a correlation between the implementation of the Bill Ayers model teacher education and training program and the decline of the core skill scores of America’s children. It could prove instructional. My guess is that this failure of basic education has been a ticking time bomb for at least 30 years.

You see, the fix has been in for so long that our children are now being indoctrinated by teachers who were indoctrinated before them. As the gray-hairs retire they are being replaced with younger teachers who are themselves products of the postmodern education system; they don’t need anywhere near the amount of retraining as their predecessors to “teach to the test.” Rather than teach skills that allow students to “visualize, articulate, and solve both simple and complex problems” on their own, they are spoon–fed platitudes, bromides, politically correct factoids, half-truths and lies.

Is it any wonder that the 18-35 demographic voted overwhelmingly for Barack Hussein Obama? It was like Kismet: he fed back all the same vapid platitudes, bromides, politically correct factoids, half-truths and lies they had been taught their entire lives. They were in love!

To explain why the over 35 demographic also voted for Obama, I need to move on to the next source of societal breakdown: the Media. 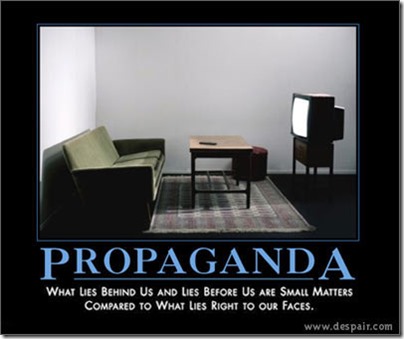 Linked By: Adrienne’s Corner, and  Rick Carnivale on facebook, and BlogsLucianneLoves, and NOBO2012 on Free Republic, Thanks!

Posted by DEWEY FROM DETROIT at 3:00 PM