Know Thy Enemy II: the Media

Barack Obama did not bring us to this first circle of hell on his own. He was aided and abetted by 1) an education system with a relentless propaganda agenda, 2) a media oligopoly that has completely abrogated its First Amendment responsibility and 3) a celebrity dominated culture that is largely a product of the first two.  Know Thy Enemy: Prologue

Today we examine the role of the “free press,” hereafter known as the Media,  in America’s demise:

Somebody — was it Burke? — called journalism the fourth estate. That was true at the time no doubt. But at the present moment it is the only estate. It has eaten up the other three. The Lords Temporal say nothing, the Lords Spiritual have nothing to say, and the House of Commons has nothing to say and says it. We are dominated by Journalism. – Oscar Wilde

There was a time in my memory when the media was respected for their knowledge of the facts and the neutrality they exhibited in the reporting of them. I even remember when sports announcers attempted to be even-handed in the calling of ball games; now that all seems so 20th century.

The throng known as the “main stream media” has lost far more than its neutrality; it’s also lost its institutional memory. While there isn’t a journalist on or off payroll who can’t recite his First Amendment rights verbatim, they seem to have collectively forgotten the responsibilities that accompany those rights; i.e. reporting the truth without regard to their personal political, religious or secular beliefs and inclinations.

The founding fathers considered a free press fundamental to the functioning of a democratic republic. They provided for a  press unfettered by government censorship to report the truth and serve as a watchdog over government proceedings. Their role was considered threefold: 1) facilitate transparency of government actions, 2) hold government officials accountable for their actions, and 3) keep the citizenry informed so they are capable of acting responsibly in both the public arena (letters to the editor, talk radio, opinion polls, public forums, boycotting, etc.) and the voting booth.

The founders considered this grand bargain crucial because they saw a well-informed public as a deterrent to public corruption and malfeasance. Hence the “fourth estate,”  whose rights are protected under the First Amendment, was considered democracy’s first line of defense against tyranny.

It makes the second line of defense, protected under the Second Amendment seem a little more important now doesn’t it? 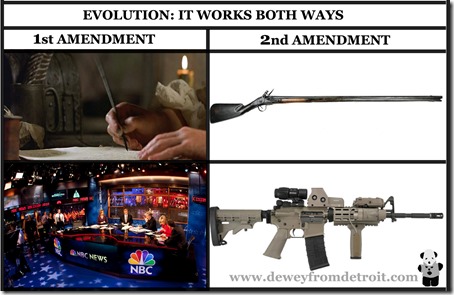 Did the Founding Fathers ever imagine Brian Williams being able to spread propaganda to 9 million people at a time on nightly TV either?

Yet today instead of an independent “4th branch” we have another vested arm of government; a preponderance of evidence indicates that the media – especially the media elite - have an institutional liberal/progressive  bias. Accordingly, and dependent on the party holding the White House, they serve as either antagonists or protagonists.

Along with the other special interest groups they love to pummel, the media has become just another influence peddler. Instead of informing the public debate they now serve to influence the outcome of that debate.

Only liberals and MSM journalists believe that MSM news is impartial and unbiased. For those of us fortunate enough to have retained our critical thinking skills however, their bias is as obvious as the zits on their face. Yet by deploying their cloak of invisibility they peer into the endlessly reflecting mirror and see nothing but their photoshopped, unblemished reflections.

They drop the cloak of invisibility when they tune to Fox News; there they see the bias zits as clear as day. So clear in fact, that some of them feel compelled to report what they’ve found to the President himself  - who in turn has seen fit on occasion to call them out for it: Fox news I mean, not the MSM. I don’t think that’s exactly how “freedom of the press” was intended to work.

The fuss over Fox’s (admittedly) rightwing editorial orientation is surprising in face of the fact that they’re outnumbered 6:1 by left leaning alphabet TV news outlets  - ABC, CBS, NBC, MsNBC, CNN, PBS -  8:1 if you count TMZ and Comedy Central as news sources, which many do – but more about that in the “Celebrity Culture” post.

It’s not as if MSM knowingly abrogated their media responsibilities. In fact that’s the worst of it: they mostly don’t know they are biased. Some do of course, but I would bet that by huge margins most of them honestly don’t view themselves as propagandists for leftist political ideology. Most teachers don’t consider themselves to be propagandists either; they’re just teaching what they’ve learned to be true.

It is not by accident that useful idiots think of themselves as important purveyors of truth. That requires training. (For details see Know Thy Enemy I: the Education System).

Media types tend to have majors in political science, communications, journalism (duh) or one of the other liberal arts. These are majors pretty light on analytical requirements and pretty heavy on  liberal professors, curricula and ideology; not dissimilar to teachers’ education programs.  And no, college professors don’t cop to being liberal propagandists either; certainly not in any biased sort of way.

For examples of ideological news bias all you need do is turn on the nightly news. The opinion part of news comes through in either the commission or omission of details and stories; and the examples are legion. But here is a particularly egregious one:

Mere days apart in the election cycle last year, two events occurred: Mitt Romney made an off-mic comment about the 47% of the country who paid no income tax, were receiving some type of government assistance and would vote for Obama no matter what (i.e. vote their pocket book - not exactly news in voting polls). A few days before that our Libyan consulate was subjected to an 8 hour attack by a mob (as it turned out, al Qaeda connected) commandeering shoulder mounted rocket launchers. They repeatedly bombed the compound, burning it out and killing our Ambassador along with 3 other Americans. Two of the dead were former SEALS serving as “security” for the Ambassador who somehow (we still don’t know how, exactly, despite Hillary Clinton’s “testimony”) managed to get up to 14 other Americans out of the complex. Reportedly (although not on any of the MSM news outlets) they requested assistance repeatedly which was denied for (still) unknown reasons.

Now, if you were watching news coverage over the course of the next 2 months on any of the alphabets you most likely heard only one thing about the Benghazi story: the mob was agitated by a bad video made by some right wing nut bashing Islam: translation, not Obama’s fault. But what you would have seen, looped endlessly, was Mitt Romney making what was characterized as a dismissive - even derisive - remark that showed just how out of touch the rich white guy was with most of America. That incident (captured on tape by a citizen journalist of the left – yay!) by itself is not the type that decides elections. But the type of coverage that it engendered does. If that is not shape-shifting the news to the media’s ideological point-of-view, what might be?

The MSM determined that the Republican being an out of touch, uncaring and callous white guy (their conclusion, long before Jimmy Carter’s grandson presented then with “proof”) was more important than whatever in the hell actually transpired in Benghazi the night the President was not to be disturbed.

How could any half-decent, half-competent reporter not dig around to find out what happened? Who would not want to nose around to find out why a country equipped with the strongest military force and presence on earth (at least for now) was unable or unwilling to come to the aid of an Ambassador and a consulate under siege? Whose blood wouldn’t boil trying to get to the bottom of this? Is Catherine Herridge really the only reporter with access to “background sources” at the Pentagon?

The answer is in the original question: “How could any half-decent, half-competent reporter…” You see, we don’t really have reporters anymore, decent or otherwise. We have journalists. The evolution is worth reviewing.

Originally there were reporters. Their job was to report the news; just the facts - who, what, when, where, and why? In the 1970’s the investigative reporter job description was added. Their job was to cover the 5 “W’s” and add an “H” – how? – which had previously been covered by the the 2nd “W,” what? But that was okay, reporters needed a career path.

Things were fine until sometime during the Clinton administration when investigative reporters didn’t feel they were getting their props so they demanded another revision to their job description and were promoted to investigative journalists.

From there, grade inflation set in and by the end of Bush’s second term everyone in the media had been promoted to journalist. Along with the title (and huge raises) both print and electronic reporters were granted the right - guaranteed under the First Amendment - to not just report the facts, but their opinion as well.  So when you hear people say “ you’re entitled to your own opinion, but you’re not entitled to your own facts” just remember, that does NOT apply to “journalists.”

Needless to say, news hasn’t been the same since the birth of  this Point-of-View-Journalism. With the upgrade of reporters came a downgrade of “the truth” (because with liberals it’s always a fixed size pie; if someone gets more, someone else has to get less). Thus truth was downgraded from “objective” truth to “perceived” truth; thoroughly postmodernized to keep up with the new responsibilities of journalists.

Do you see how nicely this new perceived-truth-in-journalism model works in tandem with the new education system?  Where “subjectivity, relativity, and pragmatism became keystones of a new "education philosophy."?

In fact, someone has already pointed out just how well these models work together, only they were talking about science at the time:

Once there was modern science, which was hard work; now we have postmodern science, where the quest for real, absolute truth is outdated, and "science" is a wax nose that can be twisted in any direction to underpin the latest lying narrative in the pursuit of power.

Substitute “reporting” for “science” and I think you get the picture.

Don’t you love it when a plan comes together? 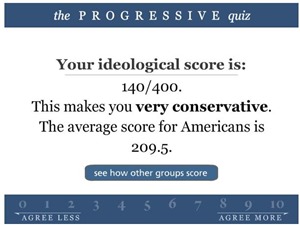 The Progressive Education/Government/Media Complex: working together to raise your score!

In the next installment I will cover how The Education System and The Media have contributed to the creation of the culture of celebrity .

Linked By: Larwyn’s Linx on Doug Ross@Journal, and Russell Barber and Bruce Cairns on facebook, and taqiyyologist on The Last Refuge, and BlogsLucianneLoves, and Free Republic, Thanks!

Posted by DEWEY FROM DETROIT at 2:21 PM