Debbie Wasserman-Schultz: DWS. Not to be confused with DSK or KSM

In what alternate universe does a dolt like Debbie Wasserman- Schultz (not to be confused with DSK, KSM, DSW or the other DWS) pass as a brilliant political strategist?

DWS speaks in such moronic, proscribed soundbites that even BHO sounds articulate by comparison. And when she is off script, she sails into Howard Dean territory, making even the former DNC chairman sound well grounded. Perhaps those talents are precisely why she got the job.

More likely though is that like any good political operative (“strategist?”) she is willing to say anything that is required to advance her party’s position. Or whatever’s required to redirect the eye from reality to the preferred illusion, no matter how foolish it may make you sound, à la the James Carville/Paul Begala Clintonista- shtick.  And while being stupid is not a prerequisite for this type of political operative (Carville) it does help (Begala). I think DWS has demonstrated all of Begala’s qualifications.

I offer for your consideration these recent comments from the “little firecracker.”  You can reach your own conclusion regarding which bucket to drop her in.

Last week she accused Republicans of wanting to kill the American  auto industry for opposing the auto bailout; 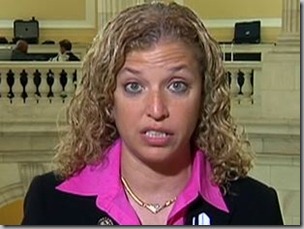 "If it were up to the candidates for president on the Republican side, we would be driving foreign cars; they would have let the auto industry in America go down the tubes…"

But according to Florida motor vehicle records, the Wasserman Schultz household owns a 2010 Infiniti FX35,(a Nissan)… The car appears to be hers, since its license plate includes her initials. (DWS)

Of course voting for a taxpayer bailout of the auto unions  companies is far more advantageous to American capitalism than  – oh, I don’t know - actually buying one of their cars. Newsflash to Congresswoman DWS, Nissan: not an American auto company. Please don’t vote to bail out Nissan or Toyota in the future by mistake. Which I guess you wouldn’t anyway, as they are mostly non-union shops.

Point two - and I don’t want to be too critical here because this is a very complicated legal principle –  but DWS is highly incensed that Republicans think that being in this country illegally should be a crime:

I think the president was clearly articulating that his position — the Democrats position — is that we need comprehensive immigration reform. We have 12 million undocumented immigrants in this country that are part of the backbone of our economy. And that is not only a reality but a necessity. And that it would be harmful if — the Republican solution that I’ve seen in the last three years is that we should just pack them all up and ship them back to their own countries, and that in fact it should be a crime and we should arrest them all. I mean that was the legislation that Jim Sensenbrenner advanced a couple of years ago.

DWS apparently doesn’t realize that being an illegal alien in this country already is, um… illegal. That’s why we use to call them “illegal” aliens before the thought police took charge.

But it looks like DWS could use a little “coaching” on this concept before she’s ready for prime time (Chris Matthews or Lawrence O’Donnell might be good).

Now in case you’re thinking DWS’s just stupid, don’t go there. In fact, she received  a Bachelor of Arts in 1988 and a Master of Arts – with a certificate in political campaigning - in 1990, both in Political Science! From the University of Florida in Gainesville!!

So take that Sarah Palin – you probably didn’t even know you could get a masters degree in political campaigning.

Now remind me: why does the media think that Sarah Palin is an idiot? I mean besides the fact she doesn’t subscribe to the doctrine of global warming, the sacrament of abortion, and thinks that  drilling our own oil and gas would be a good idea to help decrease our dependence on foreign oil? Oh that’s right, because Chris Matthews says so.

I’m sure big mouth Debbie is great at hectoring people into coughing up money for the DNC coffers, and I’m sure she  knows way more about certain types of political campaigning than Sarah Palin. But in order to avoid embarrassing the Democrats - assuming that’s even possible  - I have a little test she can take. In order to pass, she would be required to reliably identify all three of the following symbols.

Unlike in school, 2 out of three is not a passing grade.

Good luck Debbie! And if you do need a little tutoring, I understand that Katie is now available.

Posted by DEWEY FROM DETROIT at 7:36 PM