The Problem With Useful Idiots

Prior to “brainstorming” with Obama, Eva Longoria – actress, student and desperate housewife - posed for a few PR photos in front of Capital Building in order to add gravitas to her role as Administration mouthpiece: 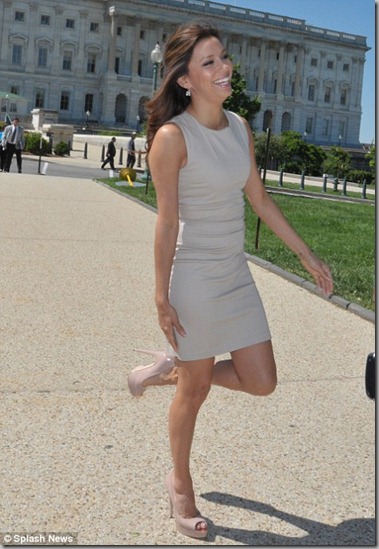 When she emerged from her “brainstorming” with Obama she repeated the directive she and the other Hispanic Obots (HOBOTS?) received:

‘The people who were in that room have a very strong presence in media so we have to help reshape the immigration talk and rhetoric about it being about xenophobia or anti-immigration. It's really an economic decision', she explained.

The problem with useful idiots is that they don’t know they’re being used. Or that they’re idiots.

They are not to be confused with the likes of Lady Gaga, who knows exactly who’s using who:

She said during a news conference Friday she has a strong relationship to Mexican culture,

translation: “Mexicans buy a lot of my CDs,”

then added: "I don't stand by many of those unjust immigration laws in my country."

… and I’m counting on my newest song ‘Americano,’ about that very injustice, to carrying my next album, Born This Way, to the top of the charts here in Mexico.

Of the two breeds, self-promoters like Lady Gaga are far less dangerous than the useful idiots. Of course they’re all targeting the same market. It’s just that the useful idiots are part and parcel of the very market they’ve been dispatched to tap into. Whereas the Lady Gagas use the idiots directly for their own purposes.

Posted by DEWEY FROM DETROIT at 11:44 AM