Osama’s Last View of Life on Earth: as Seen Through Panties

Some of us consider Obama’s decision to withhold pictures of the dead OBL as pandering to the sensitivities of adherents of the religion of peace.

While we debate the pros and cons of that position, we will have to settle for the last picture of Muhammad’s handmaiden taken before he was sent to his eternal rewards compliments of the US Navy SEALS: 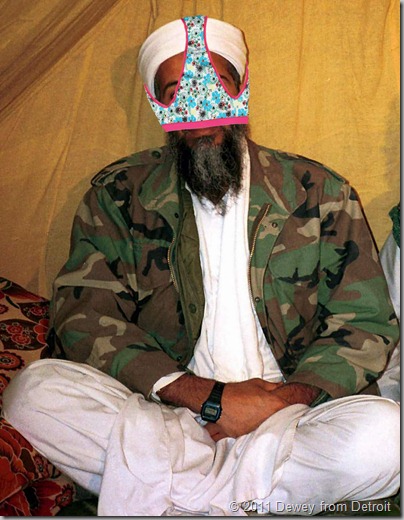 Apparently he was tortured in typical abusive American fashion before being being sent to sleep with the fishes.

Back to the actions taken since OBL’s death: the Muslim funeral preparations, burial at sea and the blackout of photo images of the dead Satanic hearse. The president has said that bin Laden did not represent Muslims or the Muslim faith; that “we are not at war with Islam.” On the other hand, much of the Muslim world seems to be treating him as a martyr and threatening retribution.

We just can’t have it both ways, kids: if he’s going to be treated as a martyr (i.e. if we release photos) than it would appear as how he does represent Muslims, or at least a faction thereof. If we insist that he doesn’t represent Islam, doesn’t reflect Islamic doctrine and is actually just a radical terrorist who has killed thousands of people; then he ought not be treated with the deference of a Muslim in good standing.

If he’s a terrorist he should be treated like a terrorist. If, however, certain adherents of the religion of peace wish to make him into a martyr of Islam without disavowal by the rest of the practitioners, than they do accept him, his precepts, his doctrines and his tactics. In which case they ARE our enemy, even if you parse and compartmentalize by calling it “radical Islam.” By allowing any faction of their faith to accept this pig as a martyr they are making all Islam radical.

Posted by DEWEY FROM DETROIT at 11:04 AM