There’s something going on in Holland that should have every self respecting Dutchman in the streets carrying a sign. It’s the Re-Education Camp style trial of Dutch parliamentarian Geert Wilders. 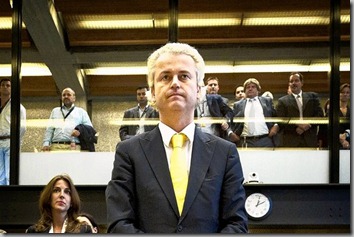 Ms. Ayaan Hirsi Ali, a former member of the Dutch parliament, now a resident fellow at the American Enterprise Institute and the author of "Nomad: From Islam to America—A Personal Journey through the Clash of Civilizations", writes in today’s WSJ  opinion piece, “In Holland, Free Speech on Trial”, chronicles the descent into submission of a once proud and free nation.

Wilders is the former Liberal Party leader who broke ranks and founded the Freedom Party, in response to the “rise of political Islam in the Netherlands.” If you’re not familiar with the term “political Islam”, you’re probably hopelessly progressive, but it recognizes the fact that Islam, as defined by the quran, is more political/legal system, than religion.

The Islamic ’sharia system incorporates such classically liberal, tolerant principles as female genital mutilation, death by stoning for being raped (unless the victim can produce 3 male witnesses to her innocence), honor killing, and just for sport, killing Jews and other infidels.

According to Ms. Ali, the Islamification of Dutch politics begins with:

... immigrants from Morocco and Turkey in the 1960s and 1970s, and then by asylum-seekers and refugees from various Muslim countries beginning in the 1990s. Most elites responded by preaching "tolerance." Give Muslim immigrants benefits and wait until they voluntarily integrate, their argument goes. Even if that process would take generations—even when it became apparent that some Muslims practiced female genital mutilation and honor killings, and imams openly urged their congregations to reject Dutch culture and law—citizens were not to criticize Islam.

She reports that in the beginning, Wilders “was dismissed as a far right-wing extremist.” He was never one to constrain his rhetoric to the soothing, politically correct jargon of his Liberal Party:

He's famously compared the Quran to "Mein Kampf" and described it as a "fascist book," he's called Muhammad "the devil," and he's proposed policies—such as banning the construction of mosques and taxing women who wear the burqa—to halt further Islamification.

But it was when his Freedom Party started to take a bite out of the legacy power parties Parliamentary control:

In the national elections held in November 2006, his party won nine seats in parliament. When the Dutch government fell again this year, June elections saw his party take 24 seats in the 150-seat body.

Wilders’ Freedom Party was growing faster than the Tea Party movement here in the US. And the similarities do not end there.

The legacy powers in Holland were no longer amused. Their attempts to marginalize, ridicule and dismiss Wilders, his Freedom Party and his supporters had failed, so there was no other alternative left to protect their power and control: they made him illegal:

This has spooked Dutch parliamentarians, particularly those wedded to multiculturalism. That's why, in the fall of 2009, they modified Article 137C and 137D of the Penal Code to make it possible for far-left organizations to take Mr. Wilders to court on grounds of "inciting hatred" against Muslims.

So here we are today, watching, impotently, without recourse, a political trial the likes of which have not been seen in Europe since the fall of Hitler’s Nazi Germany and Mussolini's Fascist Italy.

Yes, I am calling the perpetrators of this crime against civilization Nazis and Fascists. Americans did not fight and die World War II for this charade. 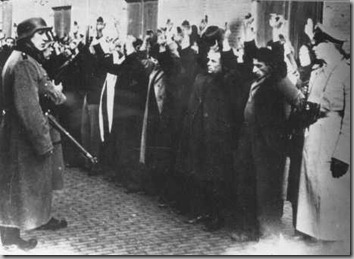 “First they came for Geert Wilders…”

Posted by DEWEY FROM DETROIT at 1:08 PM