Everyone is jumping crazy over a comment made by Parry Bellasalma, president of the California chapter of N.O.W., about Meg Whitman, indeed, being  a “political whore” after all.

Yeah, yeah, yeah. N.O.W. is a hypocritical front group for an ultra-liberal feminist organization. That’s not exactly a news flash.  So can we just act like grownups and stop with the  holier than thou position regarding the recently outlawed use of the “W” word. Since when is “whore” so offensive it can’t be spoken out loud on television? Well, I guess since National N.O.W. President Terry O'Neill condemned its use as " hate speech that carries with it negative connotations associated with women, and it has no place in contemporary society," shortly after endorsing the candidate whose campaign staff used it to describe Meg Whitman, their opponent.

But please – can we stop accepting special interest groups directives for what is and isn’t acceptable? For what is and isn’t “hate” speech? Who died and made them the arbiters of fair use? Frankly, context serves to define what is offensive, not the word police. If you call someone’s mother a whore, that’s probably meant to be offensive. If you call a politician a whore, it’s intended to be descriptive of an age old political gambit.

Let’s stop wasting perfectly good – and useful – words just because MSM has determined it is divisive, even derisive. We aren’t in junior high anymore, and as far as I can tell we are not yet a “zero tolerance” culture. In fact, we’re even been told that in the context of rap lyrics written by downtrodden black males from the ghetto, even “nigger” is  a perfectly acceptable word. If there can be exceptions made for - easily - the most explosively offensive term in the English lexicon, I don’t see how anyone could take offense at calling a politician of either party a “whore.” As the old joke goes: “we’ve already established what you are, now we’re just arguing over the price.”

Politicians have been called whores (a generic term that applies equally to men and women in this usage) for eons. P.J. O’Rourke’s best seller, The Parliament of Whores released in 1991, is still laugh-out-loud funny 20 years later. On release, the book received rave reviews: Time Magazine called it "a riotously funny and perceptive indictment of America's political system." The New York Times called it "a funnily savage attack on the political authorities of the United States."

Why? Because it skewers the type of hypocritical, whorish behavior of politicians who are perpetually currying favor and buying the support of special interest groups in order to get themselves re-elected. It is ingrained in the big government, big union, big lobbies, big media system that we have allowed to pollute our democratic process.

So don’t get all huffy with me if someone calls your favorite pol a whore, because odds are a lot better than even that they fit the (alternate) textbook description: a person considered as having compromised principles for personal gain.

If you’re sick of whores in positions of power, vote for a Tea Party candidate and hold them accountable for getting the whoring out of governing. It will be a much better use of your energies than bitching about  Jerry Brown’s wife calling another kettle black. 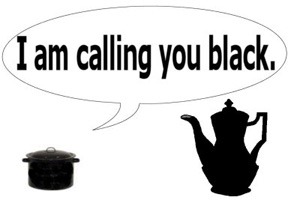 Which may, or may not, be offensive. Get over it.

Posted by DEWEY FROM DETROIT at 12:33 PM