Catholic University of America and the Slippery Slope of Accommodation. UPDATE

I apologize for having so little time available for blogging lately, but I pass along for your consideration this thought provoking message that I received yesterday from Dan Friedman. It is a  simple example of what is meant by a “slippery slope.” I would remind you that we’re still slipping, heading for the bottom and, as the laws of physics dictate, the speed is accelerating.

This is a good time to reiterate Friedman’s Laws of History #2: Wherever and whenever, Muslims reach a certain strength and critical mass, they seek to dominate the surrounding non-Muslim community.

One of my correspondents sent this along today:

Subject: Liberal Catholic University hoisted on its own petard

In 2009 at the request of the Obama regime, Georgetown University covered up a cruxifix (sic) in a hall where President Obama was to make a speech.  The President had asked to speak at Georgetown, they had not invited him. 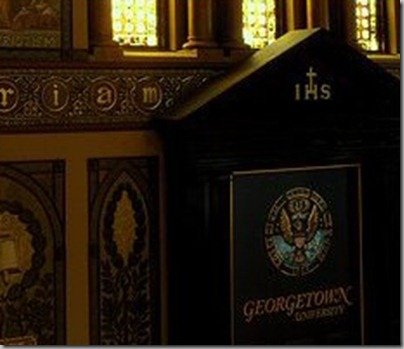 Here are the symbols found so offensive by the White House. We probably shouldn’t allow religious universities in Washington D.C. anyway, because the whole town is really a government entity.

Also in 2009, Notre Dame University invited President Obama, the most pro-abortion president in US history based on his legislative voting record, to be its commencement speaker in spite of objections by many Catholics in and around the University. 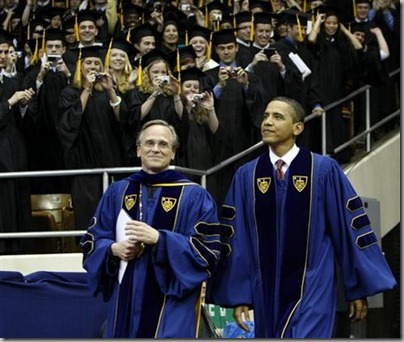 As you can see, the protestors lost to those who voted for the awesomeness of the Won’s rhetorical genius, Catholic values be damned. Literally. But you know what – Notre Dame isn’t really Catholic in the old fashioned sense anyway.

Now, Catholic University - a private university - is being sued by Muslim students because it has Catholic symbols in every room - which offends the Muslims.

Apparently, a private institution allegedly cannot have its own religious symbols within its building without offending Muslims demanding their own religious rituals on their terms.

I don't know about you, but I would tell these students to be very careful to not let the door hit them in the behind as they left the building, never to return.  But that's just me.

Catholic University is more likely to capitulate its principles just like Georgetown and Notre Dame did for President Obama.

Do Crosses at Catholic University Violate “Human Rights: of Muslims?

The Washington, D.C. Office of Human Rights confirmed that it is investigating allegations that Catholic University violated the human rights of Muslim students by not allowing them to form a Muslim student group and by not providing them rooms without Christian symbols for their daily prayers.

The investigation alleges that Muslim students “must perform their prayers surrounded by symbols of Catholicism – e.g., a wooden crucifix, paintings of Jesus, pictures of priests and theologians which many Muslim students find inappropriate.”

We’re all aware of the fact that there are Muslim factions committed to suicide missions. I’m concerned that America has factions that are likewise, but unknowingly, committed to the same end. WAKE UP OUT THERE FOR CRYING OUT LOUD!

Honestly, some days I just really can’t take it any more. 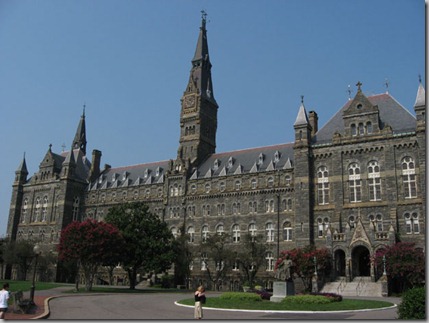 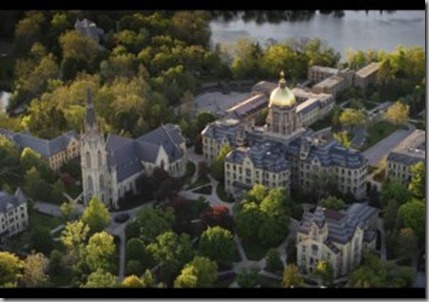 Hey - you know what we really don’t need in Washington anyway? Two intolerant Catholic universities! How about we use our Supreme Court authorized powers of imminent domain to confiscate one of these from the Church and give it to the Muslims? Because they don’t have a university of their own and that would make everything a lot fairer; and keep the Muslims off our back for awhile.

An email I sent out recently, “Liberal Catholics Find They Let The Fox Thru The Door,” was based on a piece of erroneous information contained in the source I cited:

“Now, Catholic University - a private university - is being sued by Muslim students because it has Catholic symbols in every room - which offends the Muslims.”

In fact, no Muslims students are involved in the complaint, as I learned in this report from the Blaze. It seems this is the work of one attorney, John F. Banzhaf III, with a long track record in “public interest” law. In the past, NYC-born Banzhaf has tilted against the tobacco industry, women’s rights, and once sued Spiro Agnew to recover the bribes he received.

H/T Jerry Gordon of the Iconoclast

Although none of this negates the lesson of the slippery slope. It also speaks volumes about George Washington University’s Law School (read the Blaze article for a sample of Prof Banzhaf’s activist philosophy).

Posted by DEWEY FROM DETROIT at 3:04 PM