Well, then; it’s official. Anthony Weiner will be checking his dirty laundry into the “Famous People’s Sex Clinic for Horndogs.”

But before “Weiner” becomes just another “Politicians Acting Badly”Wikipedia entry, I would like to share one last story which is only peripherally related to the Anthony Weiner “affair.” It’s actually about his wife’s name: the Abedin part.

You see, ever since I read that the lovely Huma Abedin Weiner, was born in Kalamazoo, Michigan my brain fired up it’s “irrelevant pattern recognition” synapse sequencing program.

The next thing you know, “Kalamazoo” had me thinking about Grand Rapids, which you now know to be my “birth city.” This in turn caused me to reflect on my formative years, one of which was spent at Aberdeen Elementary School which happens to sound, oddly, like Huma’s  “birth name”: “Abedin.”

Stop me if I’ve already told you this story…

Back in the 1950’s, when birth control was not so advanced, nuclear families were all the rage, especially among Catholics. Our local parish, Blessed Sacrament, was unable to keep up with the burgeoning classroom space demands of its prolific flock. In order to provide additional space, the funds originally set aside build a church for the newly formed parish were re-allocated for  additional classrooms and the “church” itself was housed in what was originally designed to be the gym and auditorium. The plan was for the real church to be built as soon as funds became available; which turned out to be some 30 years later.

Even so, Blessed Sacrament’s school, while already sprawling with add-on classrooms, was still inadequate to handle all the little boomers.

Blessed Sacrament, looking surprisingly the same as it did in the 50’s, only with trees.

The lack of facilities required the forced bussing (way ahead of its time) of whole classes to St. John’s Home, a medieval orphanage miles away housing dank dungeon-like classrooms. 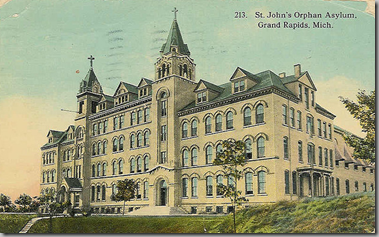 It’s basement was a terrifying labyrinth of catacomb-like cells and  huge belching boilers where students were dispatched  in the event of a tornado warning. Not conducive to learning, by today’s standards.

In addition to the required shipping out of several older classes, the parish school also lacked space for a kindergarten, so the wee Catholic children found themselves beginning their wondrous world of education in the care of  what was thought by Catholic parents to be a vastly inferior, and Godless, public school.

So while my older siblings marched off to the “good” school each morning, I was forced to walk to school with the majority of kids in the neighborhood to the inferior Aberdeen Elementary. 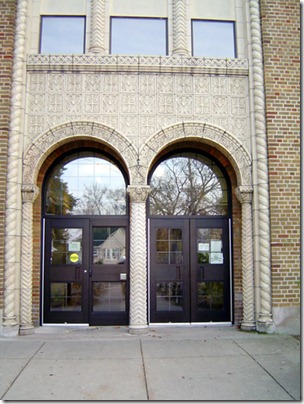 The gates to hell: main entrance to Aberdeen Elementary

Here I spent half days for a year learning the finer points of finger painting, marching while playing a triangle, standing in line and nap studies. This apartheid education system was the source of my year from hell: the 2 schools were separated by just 2 long blocks or one large softball field, but they may as well have been on different planets. 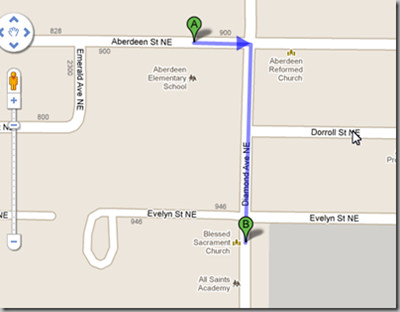 Being the only child in the family (so far) required to attend a school of lessor pedigree had already taken it’s toll on my self esteem. But the cruel taunts that I was subjected to  every day – sometimes by my own siblings! – scarred me for life. Here I was, simply a victim of life’s circumstance, being demeaned for something that was clearly not my choice: “Aber-deener Weiner!”

You’ve no idea how hurtful bullies’ taunts are until you are the victim. Each day it was the same:  the sing-songy, humiliating insult hurled at me in that taunting way that kids have: “Aber-deener Weiner!” I can still hear it as though it were yesterday.  And, of course, it was always the kids from Blessed Sacrament – whom you might have expected better from – making us feel small. 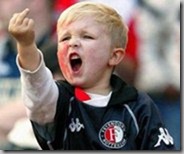 I learned at a very early age that Catholics, even the one’s you’re related to, can be very judgmental.

So filled with fear and loathing were my days as an Aberdeener Weiner that to this day the mention of  “Aberdeen” in any context automatically triggers a replay of that school-yard chant. 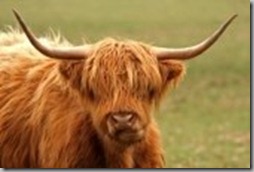 Even a homophone, like Huma, nee Abedin’s name is enough to set it off: “Aber-deener Weiner!” Some memories you simply can’t erase.

So, when I saw last summer that  Huma Abedin was marrying Rep. Weiner, thereby becoming Mrs. Huma Abedin-Weiner, I knew immediately it was a bad sign.

Had she asked me, I would have waved her off. Some times the universe tries to send you warnings. Ignore them at your own peril, Huma. 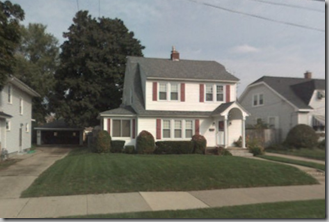 I found my old house on Google Earth. It too, looks surprisingly similar to itself in the 50’s. Only without trees. Imagine a HUGE climbing friendly Maple tree to the left, in front of the sun room, and a once beautiful elm tree to the right of the stairs.

Posted by DEWEY FROM DETROIT at 2:12 PM